The Church of England is Mad That Theaters Won’t Run a Pro-Prayer Ad Before the New Star Wars Film November 22, 2015 Hemant Mehta

Digital Cinema Media, a company that handles advertisements for many of the largest movie chains in the UK, has a simple policy against running religious and political ads before films. Why offend some paying customers just before they settle in for a couple of hours?

That’s why they rejected this minute-long ad from the Church of England promoting prayer: 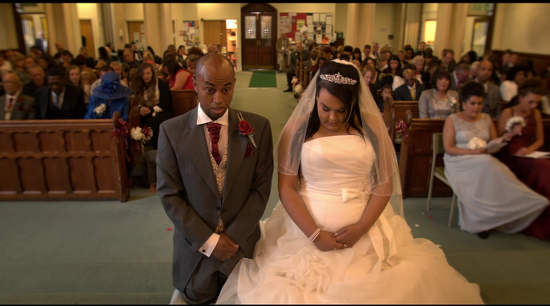 Church leaders are furious about the decision because they “hoped the 60-second film would be screened UK-wide before Christmas ahead of the new Star Wars film.” Because that’s really the target demographic right there.

The Reverend Arun Arora, director of communications for the Church of England, said: “We find that really astonishing, disappointing and rather bewildering.”

He added: “In one way the decision of the cinemas is just plain silly, but the fact that they have insisted upon it, makes it rather chilling in terms of limiting free speech.”

One of those who took part in the ad, Ian McDowall, is a former bouncer and a weightlifter who founded a Christian charity, Tough Talk, after finding his faith.

“I don’t think people know a lot about Christianity these days anyway, and the opportunity to share the Lord’s Prayer in a cinema environment would make people think — and realise that Christians come in all shapes and sizes.”

There’s no stifling of free speech here. It’s a blanket ban on controversial ads that applies equally to religious and (explicitly) non-religious groups. The idea this ad will introduce prayer to people — as if they’ve never heard of it before — is just ridiculous.

The Church is like McDonalds: It’s ubiquitous, bad for you, and isn’t going to suffer just because a single commercial doesn’t get played. I promise you everyone’s well aware of what they both sell. Unlike prayer, at least when you give your money to McDonalds, you’ll have something to show for it.

If the Church insists there’s nothing wrong with this ad, but that’s only because it’s promoting their beliefs. If the ad encouraged people to not pray, or pray five times a day, you can bet they’d be the first ones speaking out against it.

(Thanks to Maria for the link)

November 22, 2015 In Satire, Jailed Missionary Tells Iraqi Christian Why He Won't Really Be Persecuted in the U.S.
"“ I’ve been a feminist for over 50 years.” Congratulations, I can say I have ..."
BensNewLogin Should Two Oregon Educators Be Fired ..."
"Adultery is a crime for Americans in the military."
Maltnothops North Dakota Passes Law Allowing the ..."
"As The Major would say, "No, NO I won't have that ..., there's a place ..."
SltryPrNstyBrtsh&Shrt D.C. Pastor Charged With $3.5 Million ..."
"All out of mustard seeds."
NOGODZ20 A Creationist Laughably Said He Was ..."
Browse Our Archives
What Are Your Thoughts?leave a comment