When do you do when a campus preacher is yelling at women wearing yoga pants, calling them whores, while wearing a “God Destroyed Sodom & Gomorrah” shirt?

You form a circle of joy around him and dance the way your daddy taught you. 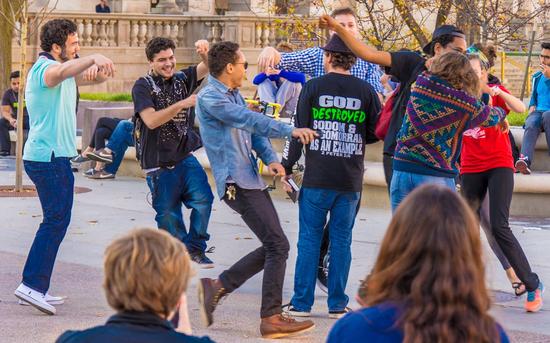 That picture was taken by Freedom From Religion Foundation intern Chris Line at the University of Wisconsin — Madison.

The students were quickly fed up with his hate and started dancing around him while singing Drake’s new song, “Hotline Bling.” More students joined in the singing and dancing. Other numbers included, “Crank That (Soulja Boy).” The students drowned out the hateful, stunned preacher.

Well, if you’ve seen the video, you know that Humanity doesn’t deserve any points for those moves… but you have to appreciate how the students’ response silenced the preacher’s hateful rhetoric, at least temporarily while he figured out what the hell was going on.

November 22, 2015
How Nebraska May Overturn Its Death Penalty Ban
Next Post