On last night’s Real Time, Bill Maher delivered a stirring speech about how Ben Carson and other candidates have religious beliefs that are appalling — and present a danger to society — and yet the media never asks about them. Because we have this idea that a politician’s religious beliefs are off-limits, even when the stakes are so high.

Carson is a Seventh Day Adventist, a Christian faith that, like many others, seriously believes Christ is coming back to Earth and taking the believers with Him. If that’s what Carson really believes, shouldn’t we all be aware of that before casting our votes?

Start watching around the 2:30 mark: 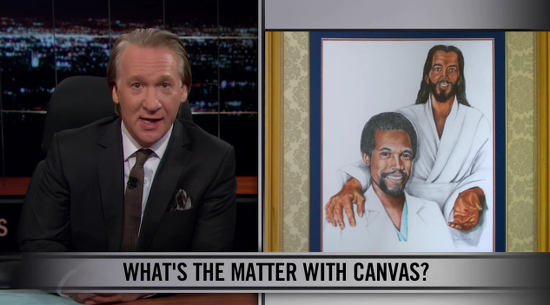 I don’t have to agree with a politician on everything. We can disagree on abortion, entitlements, paid sick leave, the earned income tax credit, but the Earth staying is kind of a dealbreaker for me!

You know what my great disappointment is? That I live in a country where 4 out of 10 people believe we’re living in End Times, and that the stupid media never asks Jesus freaks running for office two questions: Do you believe the world is ending soon? And is that a bad thing?

Politicians here love to talk about fundamental differences. This is as fundamental as it gets, folks.

How serious can people like this be about wanting to improve the future when they don’t think we’ll be around for it? A majority of evangelicals say Christ will either probably or definitely return to Earth by 2050 — depending on his schedule. So why fix the street lights if there’s just gonna be a big fight with Satan? Why reform health care? Why wear pants?!

Ben Carson says he could “feel God’s fingers pushing him to be President.” You know what? Tell God to keep His fingers to Himself. Because we know where those fingers have been: In every war in human history, from the ones He started in the Old Testament to the one that just played out in Paris.

Jokes aside, these are serious issues. When the Constitution says there’s no religious test for public office, that only means you can’t be excluded from running on the basis of your beliefs.

The general public, however, should absolutely judge candidates on how delusional they are. And the current crop of Republican candidates hold beliefs that range from wrong to dangerous. Carson, who believes in End Times theology, could very easily think he’s at the center of a Holy War if he were to make his way into the Oval Office. Not that you were going to vote for him already, but his theology should frighten everyone.