For the past two years, Florida activist Chaz Stevens has countered the Nativity scenes in the State Capitol building with a display of his own: An 8-foot-tall Festivus pole made out of Pabst Blue Ribbon cans. It’s an attention-getting stunt, to be sure, but it also makes a valid point about how the government can’t approve certain religious displays but not others.

This year, Stevens is taking it a step further. He’s still applying to install a Festivus pole in the Florida Capitol. But he’s also started an advocacy group called the Humanity Fund that’s raising money to create and install Festivus poles in State Capitols all around the country. 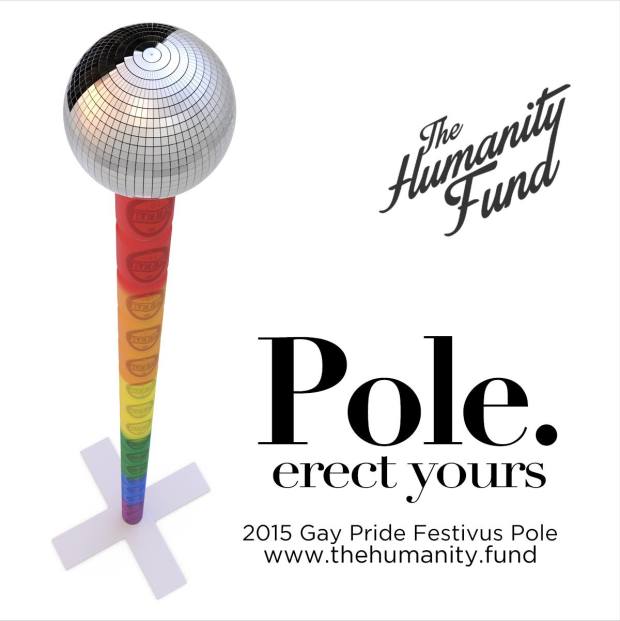 After the U.S. Supreme Court declared same-sex marriage a constitutional right, the same injustice started to play out again. We could not stand by while certain religious fanatics denied people their basic human rights and dignity, and watched in abject horror as Kim Davis, and her followers, flaunted the law of the land.

As a protest against this harassment, The Humanity Fund has decided to take our advocacy a step further by installing Festivus Poles, wrapped in the rainbow colors of gay pride, in state capitals nationwide.

You can make a donation and get some swag right here, and for $1,000, you can have a 6-foot-tall pole made and shipped out to you — with disco ball, rainbow sock, and side stand — so that you can install it at your own State Capitol building.

As for how much of the money is going to LGBT causes, Stevens tells me he’s hoping for “80-90% of net profits,” after he covers the other costs of putting everything together.