People Who Left Islam Are Explaining Why Using the #ExMuslimBecause Hashtag

The Council of Ex-Muslims Britain has started a hashtag campaign called #ExMuslimBecause and they’re asking anyone who’s left the religion to share the reason(s) why: 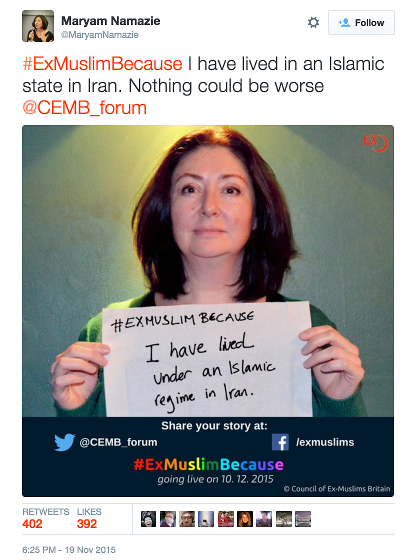 There are some powerful responses in the bunch:

Sent to us to tweet anonymously by an #ExMuslim woman who is afraid to speak up openly. #ExMuslimBecause pic.twitter.com/qMKfXFau3u

#ExMuslimBecause I couldn't debate or criticize islam without my parents yelling or screaming at me, and threatening me.

#ExMuslimBecause there's a scary amount of people out there who think punishing people for apostasy and blasphemer is perfectly acceptable.

I stand with #ExMuslimBecause Ahmed made a clock and met Obama. #RaifBadawi wrote a blog and received a thousand lashes.

#ExMuslimBecause I was told I was a Muslim. But then I learned that religion is not a gene and being born to believers doesn't make you one.

#ExMuslimBecause Ironically, apostasy laws. No real God can be such a coward that he has to urge some of His creation to kill others.

Mixed in with those responses are several reactions from people who think the hashtag is somehow “Islamophobic” or offensive. That, to me, is reason enough for more people to use the hashtag and speak out (if it’s safe for them to do so).