In one of his most slippery columns to date, New York Times columnist David Brooks opines on the peace that, for many, can be found within holy texts. Mining wisdom and contentment from a religious book is, of course, fine as far as it goes. (I prefer Italo Calvino and Gabriel García Márquez myself. To each his own.)

But as an observant conservative Jew who is gravitating more and more toward Christianity, Brooks finds it necessary to give secularism an ill-explained (and, as far as I can tell, undeserved) spanking.

Humans… are meaning-seeking animals. We live, as [rabbi Jonathan] Sacks writes, in a century that “has left us with a maximum of choice and a minimum of meaning.” The secular substitutes for religion — nationalism, racism and political ideology — have all led to disaster. So many flock to religion, sometimes — especially within Islam — to extremist forms.

I re-read it several times and still don’t quite know what Brooks is saying. Nationalism and racism are “secular substitutes” for religion? Really? When you do a mental inventory of the agnostics and atheists you know, do they, on the whole, seem like racists and nationalists to you?

When you think of countries where a spirit of secularism has greatly attenuated the power of religion — France, the Netherlands, the Scandinavian nations — do you think automatically of racism and nationalism? (Insofar as those questionable qualities exist there, they seem to be often provoked by religion, most notably by conservative Islam.)

The best I eventually figured is that maybe Brooks is thoughtlessly perpetuating the canard that Nazi Germany and Pol-Pot-era Cambodia were secular nations. If so, he is wrong.

Or Brooks could be referring to North Korea, which would also present a logical problem, given that the state-enforced cult of the Dear Leader is all but indistinguishable from a national religion.

“The secular substitutes for religion — nationalism, racism and political ideology –…”

What with the definitive article and the enclosing em dashes, the foregoing is clearly meant to read that those two isms and one ology represent the sum total of “secular substitutes for religion.”

This is what passes for reasoned argument? Erect an arrantly absurd straw man and then burn him at the stake for an additional fourteen paragraphs?

It may seem strange that in this century of technology, peace will be found within these ancient texts. But as Sacks points out, Abraham had no empire, no miracles and no army — just a different example of how to believe, think and live.

Ah yes, Abraham, who came within seconds of murdering his son, Isaac, because God commanded it … until the Almighty revealed that He was just kidding — it had only been a test of Abraham’s faith. I submit that anyone who finds morality in that behavior has hardly any business calling out the sickness that is radical Islam.

P.P.S.: In an earlier column, Brooks concerned himself with “building better secularists,” charging that secularism offers no moral guidance and no incentive to “compel sacrifice and service” (it’s definitely a pattern with him). Three atheist writers published a fine rebuttal here. 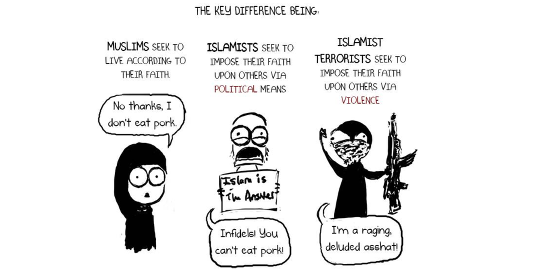 November 20, 2015
What We Can Learn from the Paris Attacks (Without Ignoring the Elephant in the Room)
Next Post