Jenny McCarthy, who played Charlie Sheen‘s love interest on several episodes of Two and a Half Men, is furious that the actor didn’t tell her he was HIV-positive when they worked together. Because, you know, she might have caught it in some way.

She made the remarks on her SiriusXM radio show: 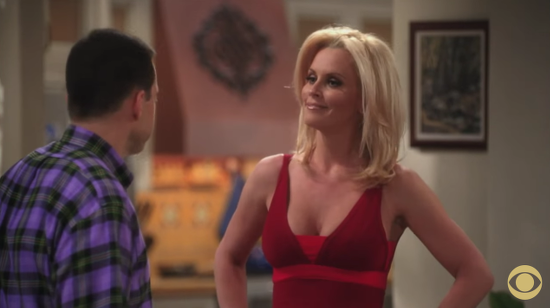 Being on Two and a Half Men myself and being on the show and playing a love interest, you would think that there would be some type of — I don’t want to say — criminal issue, but I don’t even know how to feel about that. I’m like, wait a second, if I have to be upfront about a herpe [sic], how could you not be upfront about HIV? That would’ve been some valuable information. I mean, look how many people have played his love interest on the show. I mean, not that you can obviously get it through kissing, but still, that’s a big deal.

I’ll give her a bit of credit for at least kind of, sort of saying HIV isn’t transmitted through kissing. But if she knows that, it makes her fears that much more unfounded. By her own admission, it’s not a big deal.

And why is McCarthy condemning Sheen, anyway, when she’s *way* more responsible for the spread of diseases through her campaign against safe, timely vaccinations?

By the way, Sheen’s manager pointed out that the actor wasn’t “infected [until] long after he left Two and a Half Men and long after he worked with Jenny,” making this whole issue moot.

November 20, 2015
Palestinian Poet Sentenced to Death in Saudi Arabia for Allegedly Blaspheming Against Allah
Next Post