Roanoke Mayor’s Endorsement of Japanese Internment is the Canary in the Coal Mine November 19, 2015 Lauren Nelson

We already knew that many Republicans were unabashedly displaying their xenophobic, bigoted worldview in the wake of the Paris attacks and the face of a burgeoning refugee crisis. But perhaps the most unbelievable comment about the situation came not from Donald Trump or Ted Cruz or their brethren, but a Virginia Democrat.

Yesterday, Mayor David Bowers of Roanoke, Virginia issued a public statement that set the Internet aflame. See if you can catch the passage that set everyone off: 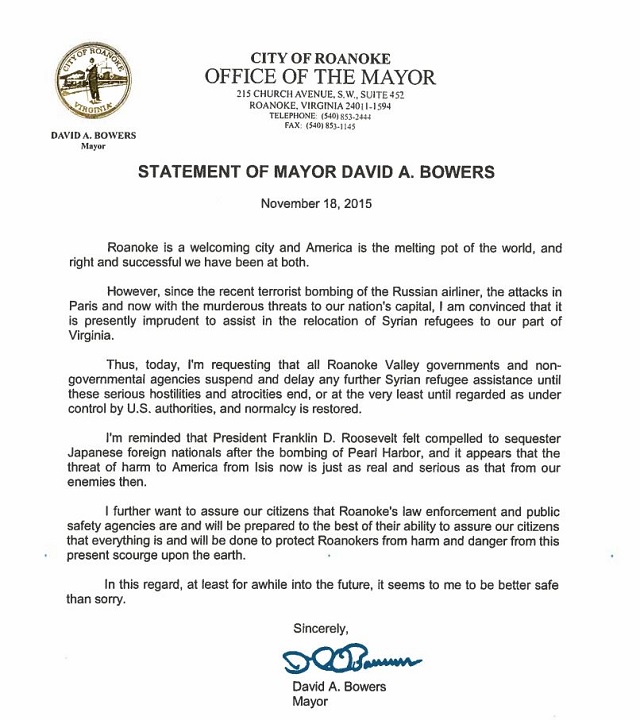 I’m reminded that President Franklin D. Roosevelt felt compelled to sequester Japanese foreign nationals after the bombing of Pearl Harbor, and it appears that the threat of harm to America from Isis now is just as real and serious as that from our enemies now.

The fierce reaction to Bowers’ abhorrent remarks might be a mild source of reassurance that the entire country hasn’t completely lost its mind yet. His own city council held a press conference condemning him. Hillary Clinton‘s campaign — which had previous included him on their Virginia campaign team — immediately cut ties, calling his statements “outrageous.” Twitter was merciless, backed by punch after punch from Congresspeople utterly incensed by the transparent racism and cruelty of the statement.

Can’t believe this needs clarifying, but the internment of Japanese-Americans (including my parents) was not a model policy.

We must end the xenophobic rhetoric around #SyrianRefugees before we regret it again. My statement: #NeverAgain9066 https://t.co/AxdXMKYinc

I am outraged by reports of elected officials calling for Syrian Americans to be rounded up and interned. #NeverAgain9066

The ACLU of Virginia could not have been more horrified, saying in part:

The government’s denial of liberty and freedom to over 100,000 individuals of Japanese descent — many of whom were citizens or legal residents and half of whom were children — is a dark stain on America’s history that Mayor Bowers should learn from rather than seek to emulate.

It is appalling that Mayor Bowers has asked public agencies and non-profits (including faith-based organizations) to single out refugees on the basis of their race, ethnicity, or nationality. It is an effort that plays into the very fear that terrorists seek to inspire, and threatens the principles for which the United States stands. For government and federally funded agencies, this is also a call to violate the Constitution and laws of the United States.

Perhaps the most gracious response came from former internment victim George Takei, who took to Facebook to school the wayward mayor:

Mayor Bowers, there are a few key points of history you seem to have missed:

1) The internment (not a “sequester”) was not of Japanese “foreign nationals,” but of Japanese Americans, two-thirds of whom were U.S. citizens. I was one of them, and my family and I spent 4 years in prison camps because we happened to look like the people who bombed Pearl Harbor. It is my life’s mission to never let such a thing happen again in America.

2) There never was any proven incident of espionage or sabotage from the suspected “enemies” then, just as there has been no act of terrorism from any of the 1,854 Syrian refugees the U.S. already has accepted. We were judged based on who we looked like, and that is about as un-American as it gets.

3) If you are attempting to compare the actual threat of harm from the 120,000 of us who were interned then to the Syrian situation now, the simple answer is this: There was no threat. We loved America. We were decent, honest, hard-working folks. Tens of thousands of lives were ruined, over nothing.

Mayor Bowers, one of the reasons I am telling our story on Broadway eight times a week in Allegiance is because of people like you. You who hold a position of authority and power, but you demonstrably have failed to learn the most basic of American civics or history lessons. So Mayor Bowers, I am officially inviting you to come see our show, as my personal guest. Perhaps you, too, will come away with more compassion and understanding.

This outrage is satisfying in some ways, but we shouldn’t close the books on this one before realizing that Bowers isn’t an anomaly right now. The irrational fear fueling today’s vitriol and discrimination is a direct echo of the political tension during World War II. Though the government publicly justified the camps as being a function of national security at the time, declassified documents revealed that, behind closed doors, those governing admitted it was more about quelling public fear than any legitimate threat. As an internal report from the War Relocation Authority stated:

The time-worn and fallacious credo that “all Japanese are sly and treacherous” was fortified and strengthened in the minds of many by the very nature of the Pearl Harbor attack. The presence of Chinese and Filipinos in large number near the Pacific Coast added to the general confusion and the fear of violence between racial and national groups.

By the latter part of February, it had become abundantly clear that the American Japanese people — quite apart from their individual intentions — were complicating the problems of western defense in numberless ways simply by living in vital areas.

As long as they continued to reside in those areas, the military authorities could never be wholly free to concentrate on the primary job of defending our western frontier.

But the folks in power were not immune to the paranoia gripping the public, either. Though they recognized the threat from Japanese Americans was nil, they rationalized their own fears by speculating on their possible reaction to a Japanese invasion. As the report continues:

Although the majority of American Japanese on the Coast were recognized by competent authorities as loyal, their behavior in the event of a bombing raid or an invasion attempt by Japanese forces was unpredictable.

Under such circumstances, would an American Japanese cooperate loyally in the defense? Or would some of them respond to years of Caucasian discrimination suffered in this country and aid the attacking forces?

As Bowers and the entirety of the Republican presidential field illustrate, this susceptibility to paranoia has not ebbed since then. And it’s not like this is a recent development, either. Islamophobia has run rampant in this country for years, augmented by 9/11 and the subsequent fears. It’s not outside the realm of possibilities that, in this climate of fear under the control of fear-mongering Republicans, we might see more voices joining Bowers’ battle cry than we’re comfortable admitting.

November 19, 2015
What Should Christians Offer ISIS — Hugs or Hand Grenades? A Tale of Two Christians
Next Post