***Update***: Another report is offering a different explanation of what took place at the game. Not sure how credible it is, but it certainly seems plausible. — Hemant

CBS is reporting an incident at the Greece versus Turkey soccer match earlier this week that goes well beyond bad sportsmanship. During a moment of silence for the victims of the Paris massacre, while players of both side observed the silence respectfully, fans of the Turkish team erupted into jeers and cries of “God is great”: 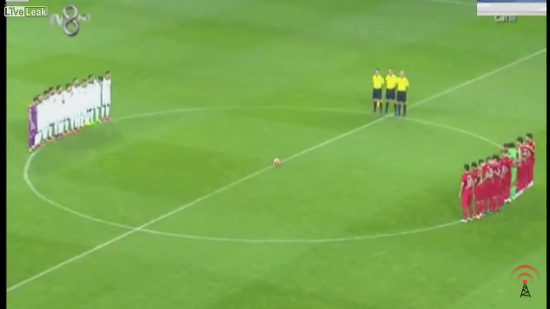 Turkish soccer fans booed and hissed loudly during the moment of silence for victims of the Paris attacks last week, and could even be heard chanting “Allahu Akbar,” during the brief pause before kickoff.

It’s not unusual to read about eyebrow-raising behavior during these matches, but this isn’t just about overzealous fans or a national rivalry. It’s at best disregard for, and in some cases embrace of, the massacre of civilians.

Turkey’s players, it should be noted, can be seen in the video observing the moment of silence. Some of their fans, though, were apparently more interested in scoring international recognition as Grade A a-holes.

November 19, 2015
An Atheist Attorney Has Helped More Than 2,500 Mormons Resign From the Church for Free
Next Post