Ohio Gov. John Kasich, the Republican Presidential candidate who has tried to present himself as the sane alternative to his far right competitors, offered a proposal yesterday that you’d expect from someone like Mike Huckabee. He suggested creating a government program to spreading “Judeo-Christian values” around the world: 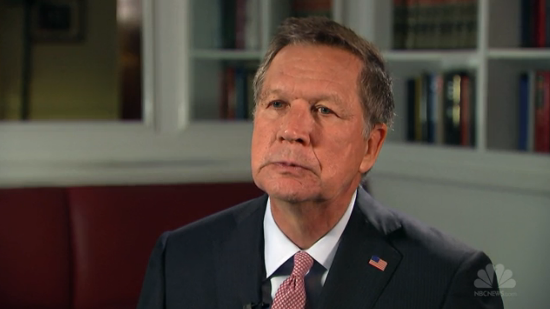 The new agency, which he hasn’t yet named, would promote a Jewish- and Christian-based belief system to four regions of the world: China, Iran, Russia and the Middle East.

“We need to beam messages around the world” about the freedoms Americans enjoy, Kasich said in an interview with NBC News Tuesday. “It means freedom, it means opportunity, it means respect for women, it means freedom to gather, it means so many things.”

He forgot what else Christian “values” have come to mean: Anti-gay bigotry, ignorance of science, pushing their personal beliefs on everyone else…

Whatever values he wants to spread, they’re sure as hell not Christian values since the most prominent Christians in our society aren’t known for spreading them.

Promoting freedom, opportunity, and respect for women? Those are human values. No Higher Power needed.

Even if he wanted to spread those values, how would he do it? Who would pay for the government promotion of these religious “values”? He doesn’t say.

In the Party of Stupid, Kasich thinks of himself as the smart one. Yet ideas like these show how that’s not saying very much.