This morning on The View, co-hosts Joy Behar and Candace Cameron Bure (who happens to be Kirk Cameron‘s sister) got into a debate about Creationism. 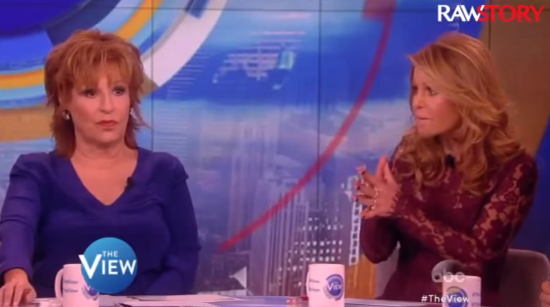 Actually, to call it a debate is unfair, because Bure didn’t actually bother defending her Creationist beliefs.

The conversation began when the panel discussed Dr. Ben Carson and how one of his own advisers told the New York Times that Carson doesn’t really know anything about foreign policy.

Behar wanted to point out that she doesn’t find that surprising since Carson has also shown his ignorance with science and history. But the moment she said he “doesn’t believe in science,” Bure jumped in to explain why Carson’s denial of evolution is perfectly compatible with science.

Bure: I take issue with that, because that does not mean that he is a dumb man or unintelligent. And you can roll your eyes at me —

Bure: But to use that as an argument, I don’t believe in evolution…

Behar: He also doesn’t believe in history! He says that the pyramids are filled with grain!

Bure: Well, I would love to bring them on the show. I would like to have this show have them on.

Bure: To say that someone that believes in Intelligent Design does not believe in science is silly. The two are compatible.

Behar: How? Explain it.

Bure: [Nervous laughter] You’re putting me on the spot…

I’m not bothered that Bure couldn’t defend her views on the spot; while she shares her brother’s warped beliefs about how the world and humanity came into existence, she’s not someone who publicly debates the topic at all. That’s no excuse for promoting bullshit on television, but let’s admit no one’s turning to her for her opinions on science.

Whoopi Goldberg didn’t help by chiming in and saying she felt the two could co-exist… which they can’t, since Creationism and reality are polar opposites. Co-host Paula Faris also pointed out that her scientist relatives are also Creationists, which says more about her family than science.

Bure later suggested they go to the Creation Museum. Because that’s a totally credible place.

As I’ve said on this site before, there’s no denying Carson is a great neurosurgeon. But being an expert in one scientific field doesn’t make you an expert in every other one. In Carson’s case, he’s not even an amateur evolution biologist.

This isn’t the first time The View has had hosts with anti-science points of view. In 2007, Sherri Shepherd talked about how she wasn’t sure if the world was round or flat. Elisabeth Hasselbeck was never shy about promoting Creationism. And, of course, anti-vaxxer Jenny McCarthy was a co-host for a while, too.

I guess this is what passes for intelligent morning show conversation these days.

(via Raw Story. Thanks to Randy for the link)