As a majority of U.S. governors have declared, legally or not, that Syrian refugees will not be allowed to live in their states, some of the Republican candidates for President have an alternative plan.

Sen. Ted Cruz, for example, said certainly refugees should be allowed to enter the country… as long as they pass a religious test for entry. 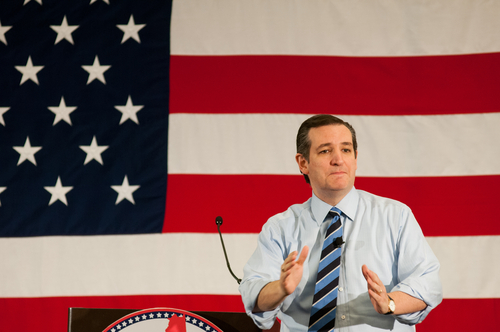 “We should focus our efforts as it relates to refugees on the Christians that are being slaughtered,” [Bush] told CNN’s “State of the Union” in an interview on Sunday morning.

How exactly would Cruz and Bush differentiate between Muslim and Christian refugees? They didn’t say. Amy Davidson of the New Yorker wanted to know Cruz’s plan: “Would he accept baptismal certificates, or notes from pastors? Does he just want to hear the refugees pray?”

President Obama, as usual, was the only adult in the room, shutting down the whole notion of a religious test. He was also, arguably, the only person following what the Bible says.

“And when I hear folks say that, well, maybe we should just admit the Christians but not the Muslims, when I hear political leaders suggesting that there would be a religious test for which person who’s fleeing from a war-torn country is admitted, when some of those folks themselves come from families who benefited from protection when they were fleeing political persecution, that’s shameful,” he said, his voice rising. “That’s not American. That’s not who we are. We don’t have religious tests to our compassion.”

The Republicans who oppose him must be following what Jesus said in Matthew 25:35:

I think I quoted that properly.

Meanwhile, Donald Trump said he would consider closing mosques as a safety precaution if he were President — because who needs civil rights, anyway?

Earlier Monday, Trump reiterated that he would consider closing U.S. mosques with radical leadership if he were elected president.

“I would hate to do it, but it’s something that you’re going to have to strongly consider,” Trump told MSNBC in a phone interview.

He also said Americans must reassess some of their civil liberties in response to growing threats from the Islamic State group.

“We have to be much tougher,” he said in another interview on CNBC. “We are going to have to give up certain privileges that we’ve always had.”

As if religious freedom is a privilege and not a right.

If this were days after the Oklahoma City bombing, and a candidate suggested closing down or installing surveillance systems in Christian churches, there would be a national outcry.

But once again, Muslims are punching bags for Republicans. And the people who need our help the most are the ones who could get screwed by politicians who believe their interpretations of the Bible trump anything written in our Constitution.

You want to make ISIS really mad? Take in the refugees and show them love and respect. By not doing it, it’s just one more argument for the radicals to make against the West when they’re trying to recruit new members.

November 17, 2015
The Dalai Lama on Praying After Terror Attacks: "It Is Illogical. God Would Say, Solve It Yourself"
Next Post

November 17, 2015 Supreme Court to Hear Pointless Contraception Case
Browse Our Archives
What Are Your Thoughts?leave a comment