There are a lot of issues relevant to contraception that could and should be evaluated by the Supreme Court. Little Sisters of the Poor Home for the Aged v. Burwell is not one of them.

The crux of the case is a follow-up question to the Court’s cringe-inducing decision in Burwell v. Hobby Lobby, the case that decided whether or not secular organizations could seek religious exemptions from the Affordable Care Act’s requirement that companies provide healthcare coverage for birth control. In an extension of the Citizens United case, the Court came to the catastrophic conclusion that Hobby Lobby could indeed claim a religious exemption because corporations are people, my friend. Because logic. 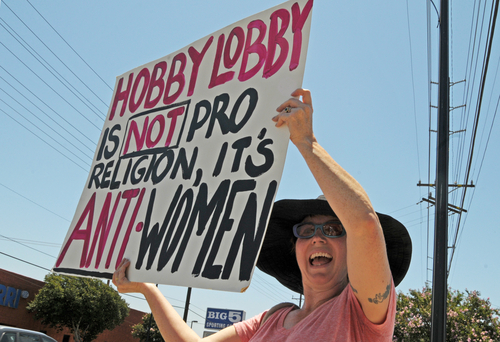 Now, a group of organizations have sued the government over the contraception mandate… but not for the reasons you’d think. As Rolling Stone‘s David S. Cohen points out:

Obamacare has a special provision that accommodates religious non-profits by allowing them to file a short form that would exempt them from providing contraception to their employees. Once filed, this form triggers the government and the health insurer to work together, separate from the employer, to cover the employees’ contraception. The exemption should make everyone happy — the employee still gets contraception covered in her insurance plan, the employer spends no money supporting what it considers immoral sex habits, and the government still meets its goal of having contraceptive coverage for almost everybody. It’s a win-win-win arrangement that the Supreme Court pointed favorably to in the Hobby Lobby case.

But not so fast. Apparently filling out a short form and putting a stamp on the envelope to mail it is too much for some religious non-profits. They want nothing to do with icky, filthy, non-procreative sex, even if no real effort or money on their part is required. So they sued, claiming this accommodation violates their religious liberty, just like Hobby Lobby’s. Almost every appellate court in the country agreed that this claim was absurd, but the 8th Circuit found otherwise in September. With the lower courts divided, the Supreme Court took the case last Friday.

Yep, you read that right. These people are throwing a temper tantrum over being asked to fill out some paperwork because, I guess, God calls that an abomination. In theory, this should be a clear loss for the plaintiffs. Their complaint is literally about submitting a form.

The spectre of Hobby Lobby still looms large with this one. If the Court rules in favor of the plaintiffs, the consequences would be grave. The contraception mandate, already hobbled by prior decisions, would essentially cease to exist. Such a decision would deal yet another blow to the legal standing of reproductive healthcare as, ya know, healthcare, and reinforce the framework that requires employees to pay for their employer’s religious beliefs at the expense of their own.

But that outcome isn’t all that likely. Given the substance of the complaint, the Court may not be up for theatrics. Remember, this case isn’t about whether or not non-profit organizations should be exempt from the mandate; they may claim an exemption already. This is about whether or not they should be required to submit a basic form. The reason it’s before the Supreme Court is largely because of the disagreement in the lower courts.

It all depends on what the defense chooses to do, though. Even though the heart of the case is about a procedural issue, the reason the whole form thing is causing a stink is that the plaintiffs believe in an archaic understanding of an ancient text with no relation to modern science or technology (newsflash, ideologues: IUDs are not a form of abortion). If they wanted to, they could theoretically sign up for another round in the ring on the subject of reproductive healthcare.

That would be a risky bet, though. If the defense allows the case to be muddled by ideological pontificating, what should be a slam dunk may become more tenuous. While the pro-choice crowd may desperately want another shot at convincing the Court that employers of any sort have no business in a woman’s uterus, and while the Court has reversed positions on ideological issues in the past, a win on all counts is highly improbable under this strategy. Historically, it can take more than a decade for the Court to shift like that.

And that’s why this whole case is headache-inducing. There’s no real win possible for pro-choice advocates here. If the plaintiffs win, it’s another black eye for the movement. The best we can hope for is that the Court rightfully rolls their eyes at the complaints of the non-profits and moves on, which isn’t exactly a major victory. It’s not like the Court is going to magically decide that reproductive healthcare must be covered by employers of all sorts.

Here’s hoping the ruling here is essentially a non-event.

November 17, 2015
Ted Cruz and Jeb Bush Say the U.S. Should Accept Syrian Refugees... As Long as They're Christian
Next Post