The Jehovah’s Witnesses have a rule requiring political neutrality. That means they “do not lobby, vote for political parties or candidates, run for government office, or participate in any action to change governments.”

Okay, fine, whatever. But in the wake of the Paris terror attacks, a lot of people on Facebook have been France-ifying their profile pictures, overlaying vertical blue, white, and red stripes on their images.

One pro-JW group on Facebook (though not an official one) is torn apart by this. As if showing solidarity with the victims by using the French flag violates their random religious rule:

Brothers, some of us maybe doing it innocently but do we realise that by displaying the French flag colors in our profile pictures we identify ourselves as showing support and taking sides in world conflicts? I maybe wrong, but what do you think? Aren’t we supposed to be neutral?

Many of the responses indicate that, yes, this is a violation and Witnesses should not be participating.

Which really makes no sense since there’s no “conflict” here. There’s humanity and there’s the Islamic radicals. If you don’t want to alter your profile picture, that’s obviously no big deal, but showing that your heart breaks for the victims of the tragedy is hardly taking a political stance.

What does it say about the faith when even a simple gesture like that is seen by some as a violation of their beliefs?

By the way, Lloyd Evans pointed out last year that two Kingdom Halls in Chile had the nation’s flags on their property (right alongside the JW logo in one case). No one seemed to care then. 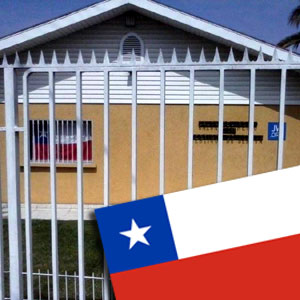 Chile has a special two-day national celebration, known as Fiestas Patrias, on September 18th and 19th. On these two days, ALL public buildings are to display the national flag, either on a flag pole or otherwise adorning the front of the building. Any institutions that refuse to show the flag do so at the risk of paying a fine.

Though reportedly some congregations would rather pay the fine than display a national symbol on a building dedicated to worship, it seems not all the bodies of elders in Chile see it as a problem.

And yet a French flag on profile pics in the days after a terrorist attack is a dilemma for some Witnesses.

(Thanks to Phil for the links)

November 16, 2015
With a Doctored Photo, a Sikh Man Is Falsely Accused of Being a Muslim Terrorist
Next Post