A couple of days ago, I posted about the Christian cross at the Port Neches RiverFront Park in Texas.

The symbol is obviously religious and has no business being there. And just because it went up several decades ago is no reason to keep it in place. That’s why the Freedom From Religion Foundation got involved.

Yesterday, there was a vigil held in the park by those who want the cross to remain in place. That’s fine. They have a right to parade their ignorance. But it’s appalling that the town’s mayor, Glenn Johnson, showed up to defend government promotion of Christianity:

“We got 13,000 people in the city of Port Neches. One is offended. I’m sorry. But what I’m telling you is this: I found it extremely interesting that the name of the group that sent me this letter was named ‘Freedom From Religion.’ [Crowd member yells, “Sounds like they got a religion!”] It sounds to me like not only are they attacking our Cross, but ‘freedom from religion’ tells me that they want religion out of our country…”

Actually, while FFRF leaders might want to convince you to shed your faith, they don’t care whether or not you believe, from a legal perspective. It doesn’t matter.

Johnson then told the crowd that, regardless of political affiliation, they should go vote for a candidate who “supports our right for the majority rule.”

Which is a really dumb thing to say. We have rights precisely to stop the tyranny of the majority. And this issue is all about what the Constitution says, not what a Christian majority wants.

How these people vote won’t change the fact that this cross is going to come down.

The question is: Will the city do it voluntarily or will they waste taxpayer money fighting a losing lawsuit before it comes down?

Johnson also told the crowd about how this Cross was a gift. That’s irrelevant. Unless, of course, Johnson wants to accept a gift from atheist groups or The Satanic Temple…

He concluded by saying he was ready for a fight with FFRF:

“We may lose… but I’m just telling you this: When we come out of the fight, they will have two black eyes, a broken leg, and a broken arm… And we may look worse, but they’ll know they have been in a fight.”

I promise you FFRF is ready to fight. And when they pursue Constitutional violations that are as clear-cut as this, they come away unscathed.

Incidentally, atheists were at the event to see what would happen. They brought along refreshments, cookies, and a note for the Christians:

We support and respect your right to free assembly and to practice your faith as you see fit, and it is our deepest desire that you allow us the same respect and support. We genuinely hope that we can all come together as human beings to find an amicable solution that will keep this beautiful cross within our amazing community without giving the appearance of endorsing any religion or belief over any other religion or belief. If relocation can be attempted, we would be more than happy to provide volunteer services to keep this part of our local religious heritage in Port Neches so that it can be enjoyed by our Christian family.

Please help yourselves to these locally purchased refreshments, and have a great time worshipping on this beautiful Sunday!

Here’s what happened to that letter: 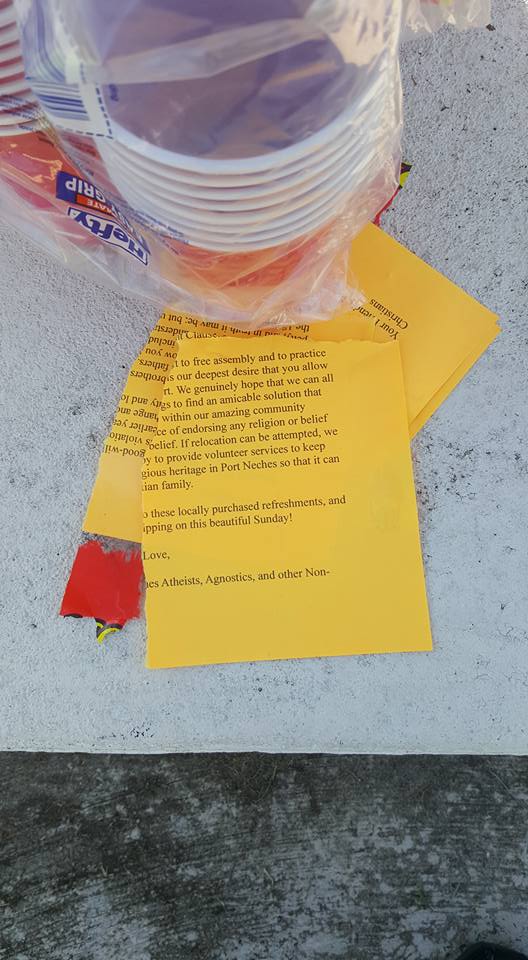 (Video via Facebook. Thanks to Amber for the links)

November 16, 2015
Some Jehovah's Witnesses Think Putting a French Flag on Their Facebook Pics Violates Their Faith
Next Post