In Praise of Bill Maher

Writing for Salon, which is always a scary way to begin a sentence, Sophia A. McClennen praises Bill Maher for posing provocative questions on Real Time that few people on TV dare to ask. It’s not that he’s always right — he’s not — but he’s willing to call out injustice as he sees it, even when it’s coming from his own side: 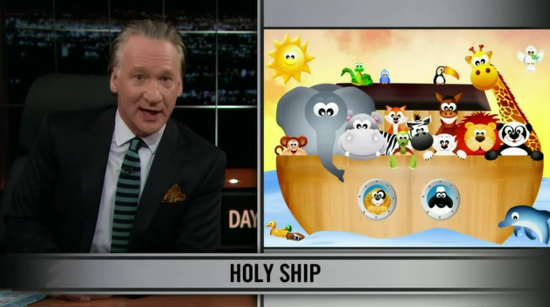 In the wake of the crises on the campuses of University of Missouri and Yale and on the heels of the Paris attacks, Maher rejected the fundamentalist thinking that often tends to frame these issues. With regard to the student protests, he attacks racism, but defends free speech. And in connection to the Paris attacks, he asks why liberals refuse to condemn the oppressive fundamentalism connected to the version of Islam practiced by terrorists.

While we might disagree with his positions, Maher makes some provocative points. Even more important he asks viewers to resist intellectual extremism and dogmatic ideologies. This means that we can condemn Islamic extremism without condemning all Islamic people. And it means that we can fight structural racism while also wondering if the student protesters’ demands are reasonable.

That’s why Real Time is one of the few shows I watch when it actually airs.

His show regularly features atheists, scientists, and progressive theists. Just to name a few: Asra Nomani, Zack Kopplin, Sam Harris, Richard Dawkins, and Irshad Manji. Former Rep. Barney Frank came out as non-religious on his show (though he later stepped back from using the A-word). Maher’s panel discusses Islam regularly, including whether drawing Muhammad is a fair exercise of free speech.

Yes, he’s wrong on the subject of vaccines (though he’s by no means Jenny-McCarthy-level wrong)… but I suspect most of his critics couldn’t correctly tell you his actual stance on them. It’s also true his humor isn’t for everyone, as if any comedian is universally admired. He’s politically incorrect and proud of it. Of course he sometimes goes too far. When you produce so many hours of live television a year, as he does, that’s bound to happen.

But if Maher weren’t on the air, good luck finding someone else with his celebrity willing to speak out against religious doctrine on a regular basis. I promise you Jimmy Fallon isn’t going to do a monologue anytime soon about the death penalty for apostates. Even Jon Stewart, by comparison, handled religion with kid gloves.

Jeffrey Tayler, also writing for Salon earlier this year, defended Maher as “a shining beacon of the New American Enlightenment, radiant with goodness and hope.” Is it over the top? Completely. But no one matches Maher when it comes to choosing targets for comedy:

Just as the brilliant satirists of Charlie Hebdo skewer the institutions, precepts and potentates of Islam and Christianity, so Maher devastatingly unloads on religion, and with consummate mordancy, even stridency — as is his right. At this stage in the fight against unreason, against this pernicious attachment we have to wicked old myths in gilt volumes, stridency is necessary, if not sufficient.

… If he succeeds in “de-converting” just a few of his believing, or even doubting, audience members a week with his show, he’s doing us all immeasurable good, and sowing hope for the future. At the very least, he’s furthering the gloriously heathen Zeitgeist, and we should be thankful.

Maher deserves to be criticized when he’s wrong, but his critics rarely acknowledge his contributions. It’s like they can’t admit he’s right about anything because he doesn’t understand the efficacy of vaccines, uses improper language when discussing sensitive issues, or makes jokes about gender and race that many progressives find offensive. When it comes to faith, though, Maher goes where few other late night talk show hosts dare, his HBO colleague John Oliver being a wonderful exception.

On occasion, Maher’s rants will even become fodder for more discussion on cable news networks and take on a life of their own, spurring the very conversations we want to create. No other show provides as powerful a venue for critics of religion.

Maher is one of the most high-profile atheists in America today and he’s using his platform to criticize religious nonsense and irrational thinking as he sees it. On balance, he gets it right way more often than he gets credit for. If only more public figures would do the same.

That’s why I don’t take atheists very seriously when they say they don’t appreciate him or don’t watch his show because of some of his stances on various subjects. I wonder if there are any public figures who meet their standards.

November 16, 2015
Lovelorn Man Lets Two Psychics Swindle Him Out of the Better Part of a Million Dollars
Next Post