If you knew her before 2013, Megan Phelps-Roper was a member of Westboro Baptist Church who would proudly picket at the funerals of soldiers, calling their deaths revenge for America’s acceptance of homosexuality. She was carrying on the hateful ideology of WBC founder Fred Phelps. 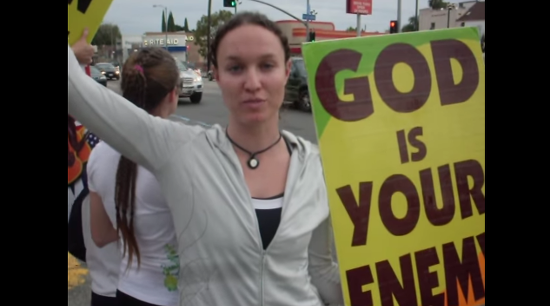 That’s why it was shocking to learn in February of 2013 that Megan had left the church for good. She wasn’t the only one, but there was a time when she may have been the least likely to escape.

While we’ve known the broader arcs of Megan’s story, Adrian Chen offers a much more detailed version of her biography in the latest New Yorker.

Watch this on The Scene.

We find out that while she was often excited by the deaths of celebrities (because it meant she could protest at their funerals and spread the church’s message), she was heartbroken when actress Brittany Murphy died:

… Phelps-Roper had loved Murphy in “Clueless,” and she felt an unexpected pang — not quite sadness, but something close — over her death. As she continued scrolling through Twitter, she saw that it was full of people mourning Murphy. The contrast between the grief on Twitter and the buoyant mood in the basement unsettled her. She couldn’t bring herself to post a tweet thanking God for Murphy’s death. “I felt like I would be such a jackass to go on and post something like that,” she said.

Years later, she expressed her religious doubts to her younger sister Grace:

When they were together, Megan engaged Grace in interminable theological conversations. When they were apart, Megan detailed her doubts in text messages. One day, she texted Grace, “What if the God of the Bible isn’t the God of creation? We don’t believe that the Koran has the truth about God. Is it just because we were told forever that this is How Things Are?” She added, “Does it really make you happy when you hear about people dying or starving or being maimed? Do you really want to ask God to hurt people? I ask myself these questions. I think the answer is no. When I’m not scared of the answer, I know the answer is no.” Two days later, she texted Grace about Hell: “Why do we think it’s real? It’s starting to seem made up to scare people into doing what they say.” Grace replied, “But what if?”

Both women are shunned now that they’ve left the church, but there are still ways to catch glimpses of their former lives — and the family they had to leave:

After they left the church, Megan and Grace were blocked from Westboro’s Twitter accounts, but they created a secret account to follow them. Sometimes, when her mother appears in a video, Megan will loop it over and over, just to hear her voice.

It’s a wonderful story if you get a chance to read it. Maybe the lasting impression from it all is that Megan changed her mind in large part because, even though she spewed hatred at strangers, some of them showed her kindness in return. She didn’t understand why but she didn’t push those people away. It opened the door to lengthier conversations about God and religion, eventually helping her realize that the dogma she grew up with was wrong.

Sometimes, not retaliating in kind, despite the religious ignorance in front of you, can work to your advantage.

November 16, 2015
Maajid Nawaz: "We Cannot Shoot Our Way Out of This Problem" of Muslim Extremism
Next Post