Comic Anthony Jeselnik Trashes “Thoughts & Prayers” Tweets. I Disagree With Him (I Think)

In the wake of the Paris attacks, just when humor seemed temporarily in bad taste and frozen in suspension, I laughed much harder at Anthony Jeselnik‘s monologue than maybe I should have. Jeselnik has a knack for telling deeply uncomfortable, cringe-inducing jokes, and this bit from his latest Netflix special is no exception. 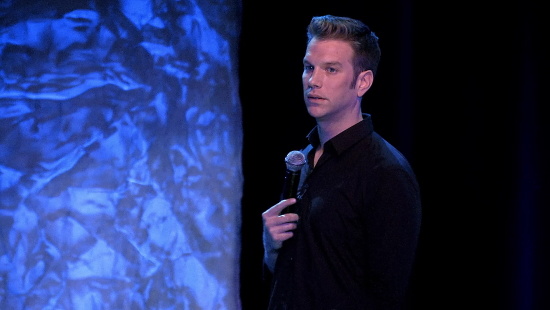 Do you know what that’s worth? Fucking nothing. Less than nothing. You are not giving any of your time, your money, or even your compassion. All you are doing is saying, “Don’t forget about me today. Lots of crazy distractions in the news right now, but don’t forget how sadz I am.” Those people are worthless, and they deserve to be made fun of.

I recognize the preening quality Jeselnik speaks of, and it’s true that “thoughts and prayers” is a ritual incantation that can be annoying for both its cheapnes and its lack of creativity. (Also, as an atheist, I think just about the last thing we need when religiously inspired madmen massacre 130 innocents in Paris is a call for more religion.)

But while “thoughts and prayers” is certainly inadequate, I disagree with Jeselnik when he says it means nothing. The phrase, ideally, accomplishes three things.

1. It gives the person who utters it a chance to say something about the tragic event, connecting with others whose mind space is also occupied by it.

2. It provides those words as an expression of succor and support to the families and friends of the victims.

3. It marks, albeit with only the tiniest soupçon of respect, one’s regret over the loss of innocent lives.

It does all these things feebly, to be sure, but that doesn’t mean the sentiment is devoid of meaning.

Again, I get where Jeselnik is coming from. The “thoughts and prayers” phrase reminds me of the almost comical lack of commitment by those who put magnetic yellow or U.S.-flag-themed ribbons on their cars after the start of the Iraq war — not stickers, mind you, ’cause apparently that would be too semi-permanent.

That said, not everyone has Jeselnik’s gift of gab, or creative-writing skills, or the ability to dream up a fresh meme. What’s the use in dumping on those who don’t? Or even on the merely lazy?

When it’s someone’s birthday, should we really have to come up with something less clichéd than, well, “Happy birthday”? When someone we know is sick, must we go out of our way to find new ways to express our concern and well wishes, rather than send the patient a heartfelt “Get well soon” message?

Next time I’m bereaved, I’ll accept any sign of sympathy in the spirit in which it was offered. If that expression of support comes in the form of genuine-seeming “thoughts and prayers,” I hope I will be gracious enough not to quibble, and to say my thanks.