Christian Pastor Steven Anderson spent part of his sermon yesterday telling his congregation that, while he doesn’t condone the actions of the Paris attackers, the concertgoers at the Bataclan theater who were there to listen to the band Eagles of Death Metal sorta had it coming: 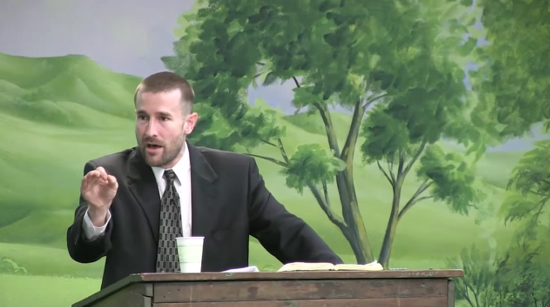 When you go to a concert of death metal, somebody might get killed! You know, you’re worshiping death, and then, all of a sudden, people start dying!… Well, you love death so much, you bought the ticket, you love worshiping Satan! Well, let’s have some of Satan’s religion come in and shoot you!

I mean, that’s what these people should think about before they go into such a wicked concert…

Anderson, who rarely accept facts, has no idea that the group is more of a parody of death metal bands. They actually play “feelgood, bluesy boogie-rock.”

He proceeded to call the group’s leader a “drug-pushing hillbilly faggot.”

Anderson also criticized France. As if the nation’s social “sins” deflect from the violence that took place on Friday. (8:45)

Now, let me tell you a little bit about this sinful nation of France. Did you know that France is the only country in the world where more than 50% of the population thinks that adultery is fine?

All of us over here in Tempe, Arizona… we’re supposed to be mourning today about these 120-some people who died in France, but we’re not supposed to give a rip about the 500 babies that France aborted today. That doesn’t matter.

Actually, he’s wrong about the adultery thing, too. The survey he cited says only 12% of French people think adultery is fine. (About 40% just don’t see adultery as a moral issue.)

And that’s just in the first ten minutes. Don’t make me watch any more.

This is what passes in these Independent Baptist churches as a biblical response to tragedy. Maybe the most surprising part of the sermon is that members of Westboro Baptist Church don’t make a guest appearance.

Then again, I only watched 10 minutes, so maybe there’s a surprise at the end.