Louisiana Senator David Vitter, the conservative Christian who was embroiled in a sex scandal years ago in which he saw an escort for years and allegedly told her to abort their love child, now says gay people are ruining the sanctity of marriage.

Vitter, who’s currently running for Governor, made the comments on Thursday during a speech at the Jefferson Baptist Church: 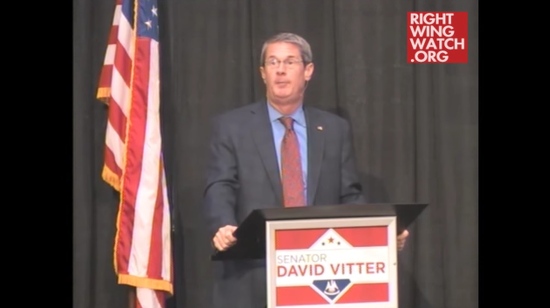 The left in American is trying to push people of faith out of the public square. [They] say you can pray in church, you can pray at home, you can pray in a closet, but don’t, for goodness sake, put that on display in public in any way, shape, or form.

And, in some cases, that’s leading to demands that others’ views, for instance, on gay marriage, be shoved down the throats of folks who have sincerely held religious views that marriage is between one man and one woman.

So, my faith has always informed my life…

Vitter added that he had sinned in the past, but that’s totally besides the point, because fuck gay people, that’s why.

He went on to say that Christians are totally being discriminated against by the people who routinely have to fight to obtain basic civil rights:

They want to make believers like us second class citizens… They want to completely push us out of the public square and in some cases persecute folks who simply want to live their faith in terms of how they do business and other things.”

How dare LGBT people persecute Christians by demanding to be treated the same way as everybody else?!

If Christians feel like second class citizens, I dare them to swap rights with LGBT people. Let’s see how much better they feel after that.

Vitter is currently losing in the race to his Democrat opponent. The election will be held next Saturday.

November 14, 2015
This is the Mormon Whose Resignation Letter Was Read Aloud by Comedian Lewis Black
Next Post