Can the Mormon Church Be Changed From the Inside? November 13, 2015 Jessica Bluemke

Can the Mormon Church Be Changed From the Inside?

The Mormon Church has been in the news a lot lately, due to a controversial new policy doubling down on homophobia: Those in same-sex relationships are now considered “apostates,” affecting not only them, but also their children, who will not be allowed to be baptized or confirmed unless they disavow their parents’ “sin.” They cannot perform missionary service (without super-special permission) and certainly cannot join the priesthood.

While this is a drastic step, the LDS has a history of being fraught with homophobia (along with rampant racism and sexism). Those of us who are outside observers of religion have seen this time after time in church after church. Personally, I’ve always thought that the longer these institutions dig their heels into their outdated ways, the quicker people will see the light and leave.

But it’s understandable for someone whose life is wrapped up in a church like the LDS — one that touches on just about every part of its parishioner’s lives — would want to make systemic changes from within. That’s what Chelsea Shields has been doing. 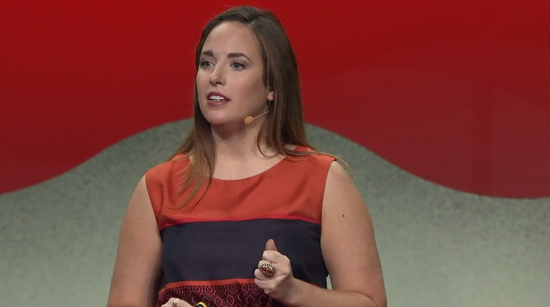 In a recent TED Talk, she spoke of her life in the LDS Church where, as a young girl, she accepted that her role as a woman would be to not have sex outside marriage, follow the rules, and be good.

She described the wonderful benefits of being in a community offered by the LDS:

… I was also the kind of religious where it didn’t matter where in the world I lived, I had friendship, instantaneous mutual aid. This was where I felt safe. This is certainty and clarity about life. I had help raising my little daughter. So that’s why I accepted without question that only men can lead, and I accepted without question that women can’t have the spiritual authority of God on the Earth, which we call the priesthood. And I allowed discrepancies between men and women in operating budgets, disciplinary councils, in decision-making capacities, and I gave my religion a free pass because I loved it.

She spoke of her efforts to change her Church from the inside. She started by building an advocacy organization, trying to attend all-male meetings, and (gasp) wearing pants to Church. That didn’t go over so well…

We lost relationships. We lost jobs. We got hate mail on a daily basis. We were attacked in social media and national press. We received death threats. We lost standing in our community. Some of us got excommunicated. Most of us got put in front of a disciplinary council, and were rejected from the communities that we loved because we wanted to make them better, because we believed that they could be.

Shields also makes a fair criticism of the liberal left. The common refrain we (and I absolutely include myself here) often level at those who are dissatisfied at how their churches are run is: “If you don’t like it, leave.”

That might work on an individual basis, but Shields points out that religion is so deeply ingrained in our culture that it has affected (and will continue to affect) all of us, no matter how far we distance ourselves from it. Look at Prop 8: The LDS Church raised millions of dollars to fight against marriage equality. Four decades earlier, it was strong opposition from the LDS Church that resulted in the Equal Rights Amendment failing.

Because religion doesn’t just create the roots of morality, it creates the seeds of normality. Religions can liberate or subjugate, they can empower or exploit, they can comfort or destroy, and the people that tip the scales over to the ethical and the moral are often not those in charge. Religions can’t be dismissed or ignored. We need to take them seriously.

And she’s right. Religion isn’t going anywhere anytime soon, so it’s arguably better for them to at least treat their followers with dignity.

The work Shields is doing is noble, I think. It’s easy to step away from an institution you aren’t happy with. It’s infinitely more difficult to work to change it from the inside.

November 13, 2015
After Getting Called Out for Not Standing During the Pledge, Atheist Addresses City Council
Next Post