Bryan Fischer, Who Regularly Says Absurd Things, Claims Atheists “Will Believe in Anything”

During Bryan Fischer‘s radio show today, a caller complained about higher education in the country because only “stupid” people go to college. Which is something you’d expect one of his listeners to say.

But that’s not what this post is about. In his response to the caller, Fischer made a side comment about atheists. The segments begins at the 4:55 mark: 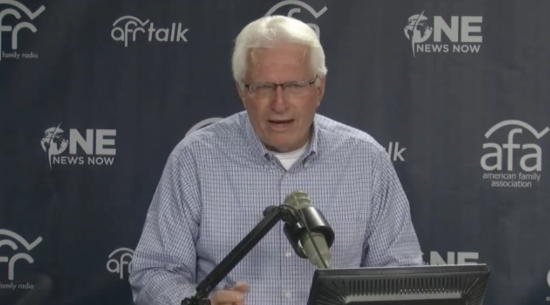 Right. Because atheists, who ask for evidence and don’t just accept whatever some guy speaking into a microphone has to say, are the gullible ones.

Fischer, who obviously thinks he’s immune to believing nonsense, has said in recent months that Mt. McKinley was renamed because President Obama hates white Republicans, the movie theater shooter in Lafayette (Louisiana) was an Obama supporter even when he wasn’t, and that the Supreme Court’s marriage equality decision means it’ll soon be “illegal for Christians to hold public office.”

But we’re the ones who believe in absurdities.

November 13, 2015
Utah Judge Backtracks After Ordering Lesbian Couple to Give Up Child
Next Post

November 13, 2015 After Appeal, Massachusetts Pastafarian Gets to Wear Colander in Drivers License Picture
Browse Our Archives
What Are Your Thoughts?leave a comment