After Getting Called Out for Not Standing During the Pledge, Atheist Addresses City Council November 13, 2015 Hemant Mehta

After Getting Called Out for Not Standing During the Pledge, Atheist Addresses City Council

A couple of weeks ago, at a Mission Viejo City Council meeting in California, atheist Al Holguin and his wife didn’t stand during the Pledge of Allegiance (because they don’t believe we’re “one nation under God”). They’re in the front row in the image below. 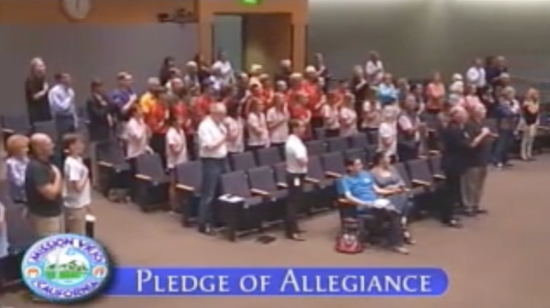 While that shouldn’t have been a big deal, council member Frank Ury indirectly called them out on it afterwards with a speech about how everyone needed to stand for the Pledge because it was the respectful thing to do. As if atheists who don’t stand aren’t patriotic.

Holguin didn’t have the chance to say anything that day, but he signed up to deliver a public comment at the next meeting. His opportunity came earlier this week; his rebuttal was powerful, paid homage to atheists in foxholes, and had all the respect that Ury wouldn’t give him.

My name is Al Holguin. I am an Atheist, Humanist, and Freethinker. My wife of 26 years and I have both lived in Mission Viejo since 1992 where we still are raising our family today. We will always be a part of this ever-changing community.

At the last city council meeting, during the Pledge of Allegiance, one of the City Council members made a wonderful speech regarding our freedoms. And one of those freedoms is to stand or not to stand for the Pledge of Allegiance. He also reminded us of these freedoms which extends to the City Council to remind us, the residents of Mission Viejo, that it is a sign of respect to stand for the flag and to let people know the wonderful benefits that we have by standing up for the flag. The council member also pointed out other city council members who are also veterans which have served in our military that have fought for our freedoms.

I would also like to remind council: Every time you see us sit in our seats during the Pledge of Allegiance, that we are in fact honoring and respecting our solders and those who have fought before them. We are also honoring the not so recognized soldiers like NFL player-turned-soldier Pat Tillman, an Atheist who died for this country in the mountains of Afghanistan. We are sitting and showing our respect for every atheist in the foxhole, Humanist, and Freethinker veteran who served and is currently serving for this great country.

On June 14, 1943, the Supreme Court ruled on the case West Virginia State Board of Education v. Barnette, students do not have to stand for the Pledge of Allegiance in class. At the end of this case, Judge Robert H. Jackson said, “Authority here is to be controlled by public opinion, not public opinion by authority.”

Jeff Mason, a fifth grade teacher at Highland Elementary School in Reedsport, Oregon, who battled for his students not to stand for the Pledge of Allegiance, famously wrote, “no coercion, intimidation, or ridicule of any kind, will fall on those that elect not to participate in the Pledge.”

Although you may see my wife and I sitting during the Pledge of Allegiance and religious invocations, it may seem to you as a sign of disrespect to our wonderful troops, but it is not. Always remember: we are honoring all of our soldiers, even atheists in the foxhole, by exercising our right not to stand for the Pledge or any religious invocation.

Holguin told me Ury didn’t respond to his comments afterwards.

November 13, 2015
Pastor Changes "Jesus Had 2 Dads" Sign Outside Church After Realizing What That Actually Means
Next Post