For some reason, the Unicoi County Schools Board of Education (in Tennessee) has a Christian flag hoisted during their meetings. So you know that’ll be coming down soon. 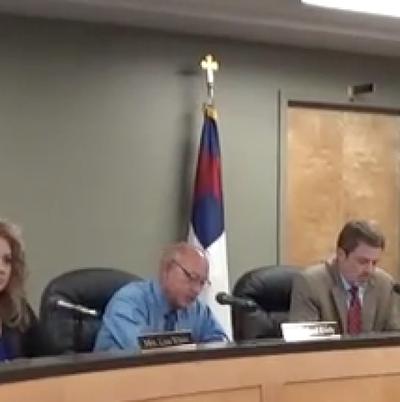 “The Christian flag being displayed during public school board meetings unabashedly creates the perception of government endorsement of Christianity,” FFRF Staff Attorney Rebecca Markert writes in her letter to the board. “The display of this Christian flag is a brazen affront to the Establishment Clause of the United States Constitution.”

The Christian flag, designed by Protestants in the early 20th century, features a Latin cross, and each of the flag’s three colors represent a different aspect of Christianity: blue refers to the baptism in water, white represents biblical conceptions of purity and red signifies the crucifixion of Jesus Christ.

Christian flags have also been at the center of controversy this year for a few city councils. Those eventually came down, too.

November 12, 2015
Wadena Nativity Scene in Local Park Will Come Down After Resident Points Out That It's Illegal
Next Post