Earlier this year, we learned that Makayla Sault, an 11-year-old with acute lymphoblastic leukemia, had died. Her disease was treatable with two years of tough chemotherapy and had a nearly 90% survival rate… but Makayla wanted to stop with the chemo and her Ojibwe/First Nations parents were more than happy to oblige, seeking out useless faith-based treatments instead.

Part of the problem was the Makayla was being treated by a “doctor” in Florida, Brian Clement, who was practicing without a license and using treatments with no chance of success. 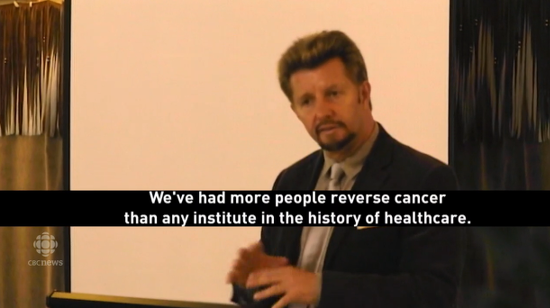 Why bring him up now?

Because he’s back in Canada and up to his old tricks again:

CBC obtained a recording of a lecture Clement gave in September in Montreal where he said, “Last week, we had somebody at the institute that reversed multiple sclerosis.”

He went on to claim that many other people who visited his Florida spa, the Hippocrates Health Institute, saw similar results.

He was scheduled to speak to children and parents today at an elementary school in Qualicum Beach, B.C. However, after CBC News called to confirm the lecture, school officials said it was cancelled.

“The school was not aware of the controversy surrounding this individual,” said Corleen McKinnon-Sanderson, vice-principal of Qualicum Beach Elementary School.

Obviously, there’s no confirmation that he reversed MS. You probably won’t find it since MS doesn’t currently have a cure. But that’s what he’s suggesting to audiences.

(via Sean McGuire. Portions of this article were published earlier)

November 11, 2015
After Letting Their Daughter Die of Pneumonia, UK Faith-Healing Parents Are Going to Jail
Next Post