It’s common knowledge that singer Katy Perry, before becoming a pop star, was a gospel singer. It’s less well known that her parents are still preachers.

Keith Hudson, her dad, recently did an interview with a Christian radio station in Phoenix. As he left he studio, he was accosted by Christine Weick, the lady known for protesting outside a Luciferian Church and claiming that Monster energy drinks are the work of Satan. 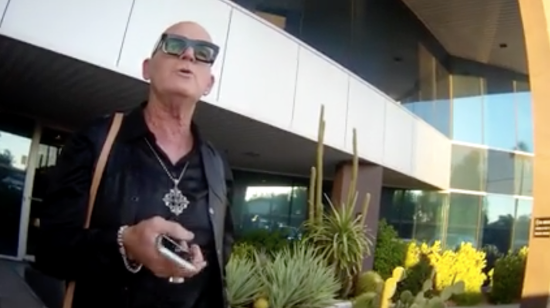 I got angry today. REAL ANGRY! I found out that the parents of Katy Perry were guests on Christian Radio 1280 KXEG out…

Despite her attacking him for not controlling his daughter — as if Katy Perry shouldn’t be allowed to pursue her own career path — he did a good job of keeping his cool. The most telling exchange between the two Christians, though, was Weick explaining how she has no relationship with her own son because he doesn’t share her faith. (“I have nothing to do with my son because of that.”)

If that’s what her religion makes her do, why would anyone want to be associated with it?

She wanted to rebuke a pop star’s father and ended up making herself look awful. It’s pretty much what she does every time she’s in the spotlight. She’s the type of character I would create if I wanted to make Christianity look ridiculous, so maybe we should show her some gratitude for making atheism look especially appealing.

(Thanks to Andy for the link)

November 11, 2015
This Video on the "Nature of Science" Uses Every Creationist Fallacy You Can Imagine
Next Post

November 11, 2015 Man Who Represented Kim Davis Says Elected Officials Should Embrace the Law or Resign
Browse Our Archives
What Are Your Thoughts?leave a comment