The last time Joshua Feuerstein was ranting about Starbucks, he was yelling at us about why the red cups were somehow “taking the Christ out of Christmas.” You may recall that he encouraged his fans to go to Starbucks, buy coffee, and tell them their name is “Merry Christmas” so the baristas would have to write it on the side of the cup. He even urged people to use the hashtag #MerryChristmasStarbucks. 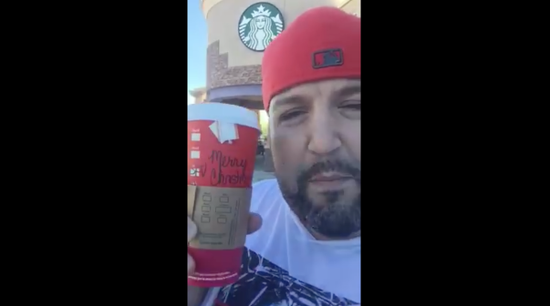 Starbucks REMOVED CHRISTMAS from their cups because they hate Jesus … SO I PRANKED THEM … and they HATE IT!!!! #shareUse #MERRYCHRISTMASSTARBUCKSFollow –> Joshua Feuerstein

But now that everyone’s paying attention to him (and laughing… a lot), he’s changed his tune completely. Now he’s telling his followers to avoid Starbucks at all costs. Because if you buy coffee, you’re really supporting — wait for it — the genocide of babies!

He’s deleted the video, maybe because he realized how easy it is to spot hypocrisy that obvious… but he forgot to delete the transcript from his own website. Because he’s Joshua Feuerstein and thinking isn’t one of his strong suits. (In case he figures it out, here’s a permanent copy.)

***Edit***: Wait! A copy exists! (And I’ve saved it in case he manages to take that one down, too. Thanks to reader Norma for the link!)

You see Starbucks, we’re glad you’re distancing yourself from Christmas and anything Christ, because you’re nothing alike.

You stand directly against pretty much everything Jesus stood for.

While Christ forms beautiful little babies in the womb, you use your customers money to pull them out, tear them apart, and sell them to the highest bidder.

Starbucks we want to know, how does it feel to support the genocide of millions of babies through your support of Planned Parenthood?

So Christians, next time you’re drinking your bitter overpriced abortion coffee, think about what you’re actually choosing to support.

So if I have this right, Feuerstein wants you to drink Starbucks coffee… even though they’re supporting genocide. And he wants to force Starbucks to be more Christmas-themed… so that Christians can promote abortions.

I have no idea what Feuerstein wants. And it’s obvious he doesn’t either.

It’s a shame the video was pulled. He even got all fancy and used shitty horizontal video this time. At least the publicity from the Starbucks stunt has more people talking about his shady money grabs.

By the way, we’ve gotten some blowback for posting anything about Feuerstein because some critics think we shouldn’t give him the attention he wants. I disagree. I think it’s to our advantage to show what conservative Christians like him are saying because it’s so incredibly stupid, a lot of people agree with him, and they make the whole belief system look bad.

It’s like quoting the nasty verses in the Bible. All I have to do is point people to the direct quotations and they can see for themselves how a supposedly great religion inspires some truly despicable people. (And to anyone who says Feuerstein doesn’t represent “real” Christians, feel free to explain why the nearly 2 million people who like him on Facebook aren’t “real” Christians either.)

November 10, 2015
“Jesus Welcomes You to Hawkins” Sign in Texas is Somehow Still at the Center of Controversy
Next Post