On Egypt’s Al-Assema TV last week, host Rania Mahmoud Yassin was going to moderate a conversation about religion between human rights activist Ahmed Harqan and another guest… but after the introducing the segment by mentioning the “unfortunate” truth that there were atheists in the country, Harqan took her to task for her bias, leading to a shouting match between the two over whether or not the existence of atheists was a bad thing: 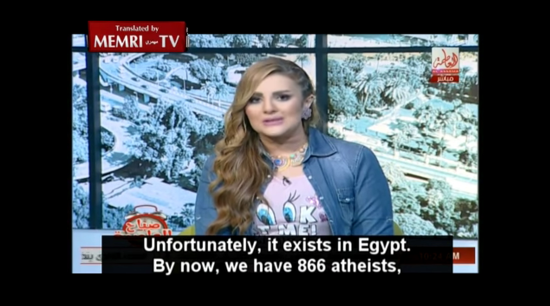 In her introduction, Yassin reiterated the absurd claim that there are exactly (and only) 866 atheists in the country. And at the end, when Harqan walked off the set, Yassin yelled at him, “Fine, leave. Go away. We don’t want any atheists or infidels here anyway.”