Christians Are Furious That Bible Distributions Have Ended in a Tennessee School District November 10, 2015 Hemant Mehta

Remember when the Orange County schools in Florida allowed an outside group to passively distribute Bibles to students? They left them on a table and students could pick one up if they wanted a copy. But the school board had to make a decision after atheists and representatives from the Satanic Temple requested the opportunity to hand out their own materials. Eventually, board members decided to stop all distributions of religious (or anti-religious) material. 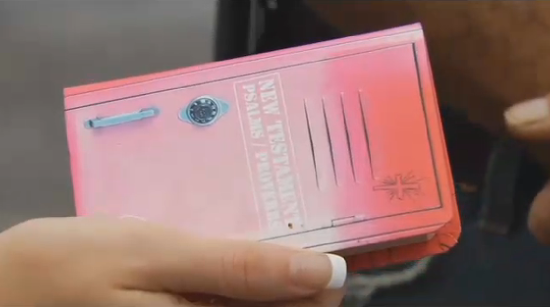 … Gideon [member] Charlie Queen has been giving away new testament bibles at school libraries across Bledsoe County for years. He says 5th graders could take one or walk away, no pressure.

“We simply go in, we lay it on the table, we tell them what it is and who we are and if they want one…they freely take one,” said Charlie Queen, Chaplain for Sequatchie Valley Camp of Gideons. “We do not hand it to them, they take it freely and voluntarily.”

“I look at it more as a loss of a freedom more so than anything else,” said Queen. “We are right here on Veterans Day…. people have fought, sacrificed and died for their country and for these freedoms. Now another one is trying to be taken away, that’s what breaks my heart.”

He’s not alone in being frustrated by having his fake rights challenged:

“My whole congregation is very upset,” said Pastor Bill Wolfe, Lee Station Baptist Church. “We talked about it yesterday morning. They (Gideons) come in and they don’t force anything on any child. It’s an opportunity for them to receive a New Testament Bible. They can take it if they want one and they don’t have to take it if they don’t want one. This has been going on…well I’m 51-years-old and I still have mine that I received in the 5th grade, so it’s been going on for years and years.”

Pastor Bill Wolfe says he and others are ready to take a stand.

Well, the response to both men is obvious: Are they comfortable with students also picking up a Satanic coloring book and material published by atheists explaining why the Bible is full of bullshit?

If they are, fantastic! Then all groups must be welcome to distribute materials to children.

If they want exclusive access to indoctrinate children, they’re not getting it.

It’s that simple. So they need to stop being offended and decide whether or not they want to share space with people who don’t agree with them and who are eager to tell children why.

The Superintendent has wisely decided to prevent her schools from becoming a religious battleground. Let’s give her credit for that. Queen and Wolfe, however, should look up what happened in Orange County before they complain even more.

November 10, 2015
How Should You Raise Your Kids When You Find Value in Religion but Don't Really Believe in God?
Next Post