The Latest Battle in the War on Christmas Includes Mall Displays Without Trees and Reindeer November 9, 2015 Hemant Mehta

There are 110 malls owned by the Simon Property Group, and 7 of them had a revamped background for kids who wanted to take a picture with Santa. Instead of Christmas trees and reindeer, there was a modern-artsy glacier, like this one at Roosevelt Field Mall in New York: 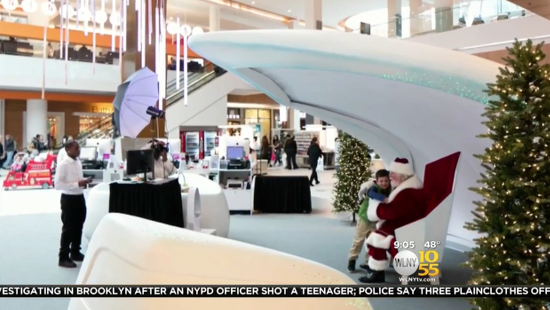 The correct reaction to this is: “Well, look at that. It’s different.” And then you keep shopping and move on with your life because who gives a shit.

For many people, though, the response was to boycott the mall. Because if a Christmas display doesn’t include trees and reindeer, then Baby Jesus will cry. Or something like that.

Dorothy, of Wantagh, started a petition demanding that the big Christmas tree be returned.

“They’re taking away our tradition,” she said.

Ronnie, a shopper at the mall on Saturday, told D’Auria it was silly that the tree was eliminated because some thought it offensive. She said all the holidays should be celebrated fully.

What happened to the good old days of the War on Christmas when people complained about the lack of a Nativity scene…? These malls gave Santa a more “wintery” backdrop, and people revolted because they didn’t follow the True Spirit of Commercialism. Even Starbucks got in trouble for using red cups because that wasn’t enough.

Simon Malls didn’t want to fight this battle, and representatives said a few of its malls would quickly revert back to the “traditional” display with candy canes and presents. So congratulations, you thin-skinned dissidents. You got what you wanted.

It’s Americans at their most selfish. Which is the exact opposite of what I thought the holiday was supposed to be all about.

(Thanks to Thomas for the link)

November 9, 2015
Watch Matt Dillahunty Deconstruct the Entire Sermon on the Mount
Next Post