Starbucks-Hating Joshua Feuerstein Gets Called Out as a Bigot During CNN Interview November 9, 2015 Hemant Mehta

After vertical video addict Joshua Feuerstein yelled at his fans about how Starbucks is “taking the Christ out of Christmas” because they’re using solid red cups, even CNN wanted to know what the hell he was whining about. 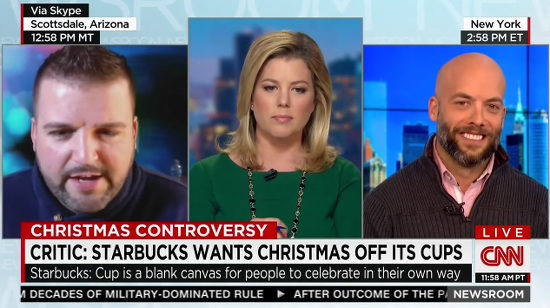 Turns out the answer is nothing. When asked to defend his rant, Feuerstein had little to say (other than a jab at how President Obama isn’t truly Christian) and got verbally thrashed by the other guest, radio host Pete Dominick, who offered a much better way to spread the love of Christ than anything Feuerstein had to offer:

Feuerstein spent half the interview complaining about how he couldn’t hear what Dominick was saying. I don’t know if I believe him. But if he’s being honest, I think I figured out what went wrong.

Whenever someone uses a normal video camera orientation on him, he loses all of his powers.

By the way, if you want a quick lesson in how to appear on television, just watch Dominick. His facial reactions throughout the segment were perfection.

November 9, 2015
What We Can Learn from Alternative Medicine Practitioners
Next Post

November 9, 2015 Former Atheist Group Leader is Now Chair of the Bangor (Maine) City Council
Browse Our Archives
What Are Your Thoughts?leave a comment