Last week, Federal Reserve Chair Janet Yellen was on Capitol Hill to speak about banking regulation and pointed out that the interest rates may rise this December for the first time since 2006. 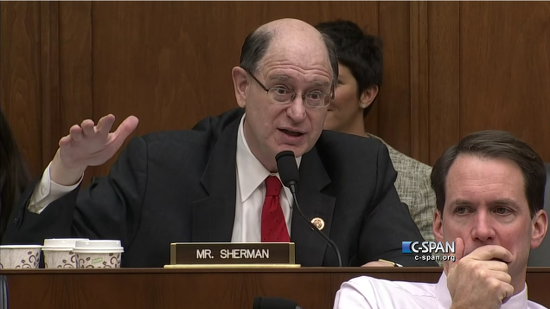 The man in the foreground of that picture has the right reaction because the reason it’s called “fall” has nothing to do with monetary policy and members of Congress shouldn’t be making decisions based on what they think God’s Plan is.

While delaying an increase in interest rates may be better for the economy, if that was supposed to be a joke, it failed miserably.

Sherman, who’s Jewish, did some damage control later that day:

Don't actually think God has an opinion on monetary policy, but if She did, She would agree that the FOMC shouldn't increase rates in winter

To be clear, Sherman has a perfect rating from Americans United for Separation of Church and State. When it comes to the hot-button issues, he’s someone who’s on the side of most liberals.

But given how many people think he was serious, it probably says more about the sad state of our politics. This is the sort of thing you wouldn’t be surprised to hear coming out of a Republican’s mouth — only they would actually mean it.

November 9, 2015 Ohio High School Teaches Kids That Adoption is Only Option for Babies Resulting from Rape or Incest
Browse Our Archives
What Are Your Thoughts?leave a comment