Sen. Ted Cruz: Atheists Aren’t “Fit to Be Commander-in-Chief of This Nation”

On Friday, at a conference sponsored by Pastor Kevin Swanson (who thinks gay people should be put to death), Sen. Ted Cruz was one of three candidates who took the stage.

Swanson asked him the softball question of whether or not the President of the United States needed to fear God. That’s when Cruz began salivating: 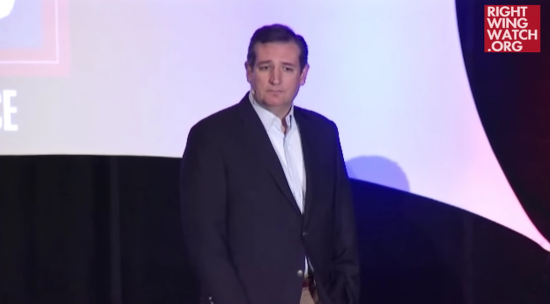 After putting on his serious puppy dog face, Cruz said,

But a Creationist who thinks he knows what’s best for women’s bodies and would deny rights to millions of LGBT Americans is qualified?

There’s a very fine line between what Cruz said and the fact that the Constitution forbids a religious test for public office. Cruz didn’t say atheists couldn’t run, only that they weren’t “fit” for the position. He’s entitled to his opinion and we’re entitled to think he’s an ignorant fool.

But just imagine what his reaction would be if Sen. Bernie Sanders said someone who wastes time praying in office wasn’t fit for the presidency. He’d be crying Christian Persecution the second someone handed him a microphone.

At least in this case, the problem isn’t his bigotry. It’s his hypocrisy.

“By claiming that those who do not pray are not fit for office, Senator Cruz is perpetuating the prejudiced myth that humanists and atheists are not moral people,” said Bishop McNeill, manager of the Freethought Equality Fund PAC. “There are a number of recent studies that show that despite how religious Americans remain, a majority of people would vote for a qualified atheist for President.”

“In his callous dismissal of humanists, atheists and other secular Americans, Senator Cruz also shows that he is out-of-touch with the growing number of Americans who are not affiliated with any religion,” McNeill continued, in reference to the 2014 Pew Religious Landscape Study released last week that reported 23 percent of Americans do not identify with any religion.

Robyn Blumner, the director of Openly Secular, a campaign supported by a coalition of more than 20 secular organizations to eliminate discrimination against and increase acceptance of atheists, agnostics, humanists, freethinkers and nonbelievers, says by appearing at this conference and spouting intolerant and ignorant statements, Cruz is reinforcing the prejudices of his Religious Right base.

“When Cruz speaks to a right-wing, religious audience,” says Blumner, “he can choose to be a leader and deliver a message of tolerance and acceptance of all Americans regardless of their belief or lack of belief, or he can choose to divide us along cultural and religious fault lines. Cruz has chosen the latter, demonstrating his willingness to act as a demagogue on a sensitive issue and calling into question his ability to lead.

“His conclusory statement suggesting that someone who is nonreligious is not qualified to hold public office is not only deeply insulting and patently wrong, it suggests Cruz doesn’t know that America’s founders explicitly rejected the idea. They enshrined in the U.S. Constitution a prohibition of religious tests for public office.”

November 8, 2015
Creationist Kent Hovind Will Be Speaking at a Public School in Ohio This Tuesday
Next Post

November 8, 2015 Mormon Elder Clarifies New Anti-Gay Policies, but the Critics Were Right All Along
Browse Our Archives
What Are Your Thoughts?leave a comment