There’s really nothing the Republican Presidential candidates can say anymore that will lose them any support. The more outlandish the claims, the more the base loves them.

So why not speak at a conference hosted by a Christian pastor who wants gay people to die?

That’s what Mike Huckabee, Ted Cruz, and Bobby Jindal did on Friday at an event hosted by Pastor Kevin Swanson: 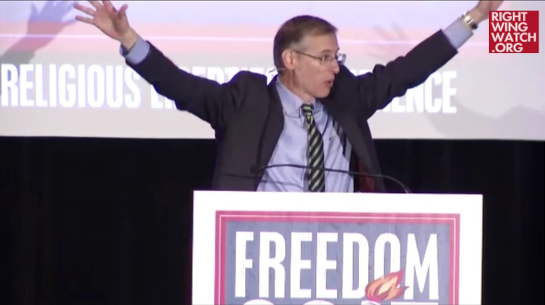 There are instances in which both the Old and New Testament speak to the matter with unbelievable clarity… You know what that sin is. It’s the sin of homosexuality… In fact, in Romans 1, Paul affirms that this particular sin is worthy of death… Granted there are varying levels of clarity/relevant relating to ethics, but still, the Old and New Testament, I believe, both speak with authority and we ought to receive it.

This is a man three Presidential candidates felt comfortable sharing a stage with.

But again, none of them give a shit, and why would they? Their Christian base has shown time and time again that they don’t care about LGBT lives. They’ll go out of their way to make LGBT lives miserable even when the demands from the other side are as simple as being allowed to sign an apartment lease without discrimination or using a goddamn bathroom.

It won’t hurt the candidates at all. That’s what’s wrong with the GOP and every Christian who supports pastors like Swanson.