The last time I wrote about The Nightly Show, it was because of an infuriating discussion between Bill Nye, who was eager to talk about the implications of finding water on Mars, and two comedians who couldn’t care less. The problem was that the comedians became the focus of the segment while Nye was mostly relegated to the sidelines.

The other night, I feared it would happen again during a discussion about faith and science. Thankfully, that wasn’t the case. Not bad for a six-minute segment. 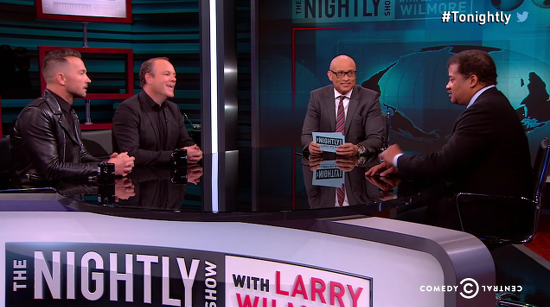 Neil deGrasse Tyson had a lot to say about why a literal interpretation of the Bible was absolutely incompatible with science, while adding that plenty of scientists found ways to reconcile the two worlds (even if he didn’t agree).

Pastor Carl Lentz spoke in platitudes, arguing that religion shouldn’t be afraid of science and knowledge… though he had no real substance to back that up. Still, it makes sense to have a Christian on the panel, so I don’t hold that against the show.

Comedian Tom Papa jumped in with some jokes, but at least he didn’t try to dominate the discussion.

And host Larry Wilmore played the moderator. He showed his own ignorance by bringing up the watchmaker argument, but mostly he let the others take charge.

It could have been worse. It was at least an improvement over what happened last time. Mostly, it made me appreciate that Bill Maher brings this topic up all the time and his conversations are much more interesting.

(Thanks to Austin for the link)

November 5, 2015
Portland Public School Choirs Will No Longer Sing “Sacred” Music at Catholic Shrine After Board Vote
Next Post