When Chasity began her senior year at Jackson High School in Georgia, she was aware she had put on a little weight, but it was the least of her concerns. She managed multiple sports teams at the school, had a part-time job, and did well in her classes.

The problem began when she went to go sign up for the Student Government Association, which she had been involved with all throughout high school. The adviser for the group asked her if she was pregnant. She wasn’t. But it didn’t stop there. 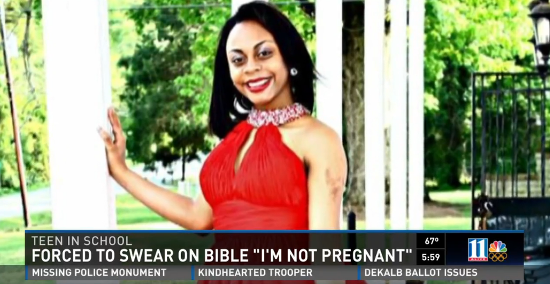 “The coordinator saw her in the lunch room and said she wanted to talk with her,” [mother Tammy] Williams said. “She asked her if she was a Christian, she [Chasity] said yes. She [the adviser] asked another teacher to get her a Bible. When she got the Bible, Chasity told me that she asked her to swear that she was not pregnant.”

Chasity swore on the Bible she wasn’t pregnant and paid the $25 SGA dues.

But the adviser came back to Chasity in early September and repeated the allegation.

There’s nothing okay with this story, from the body-shaming to forcing a student to make any sort of promise on a Bible. The District’s superintendent said there’s an investigation underway, though nothing has happened yet. Given how many times Williams has brought this issue up to the principal, that’s some gross misconduct by the administration.

November 6, 2015
Woman Who Starved and Robbed Mentally Disabled People Says She Believes in God, and "He Knows What Happened"
Next Post

November 6, 2015 Texas Attorney General Says "In God We Trust" on Government Vehicles is Perfectly Legal
Browse Our Archives
What Are Your Thoughts?leave a comment