Yesterday, Senator Orrin Hatch (R-UT) delivered a lengthy speech about religious liberty in which he spoke out against what he called the “fundamentally flawed foundation” of church/state separation: 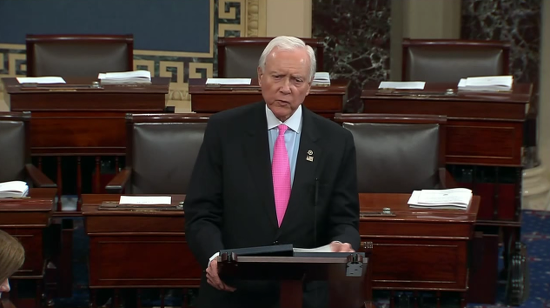 Upon this fundamentally flawed foundation, the federal courts have constructed a jurisprudence that threatens any place for religion in the public sphere…

The Court’s flawed wall-of-separation jurisprudence has kept religion out of the public square and fed the idea that religion is a private matter to be practiced within the confines of one’s church or home. Legal and social pressure have taken their toll, and the results are stark:

No prayer in school;

No new Ten Commandments displays — or even Christmas or Hanukkah displays — unless carefully secularized;

A widespread prejudice in many quarters against public officials talking about God or about their beliefs in public;

And even the crusade every December to replace the phrase Merry Christmas with Happy Holidays;

Every one of his fears is unfounded.

Prayer is allowed in schools. Mandatory, teacher-led, school-sponsored prayers are not.

Christian displays are allowed on private property — churches, homes, etc. — but they absolutely don’t belong in front of, say, a courthouse. Hell, the Ten Commandments barely overlap with our country’s laws.

If there’s prejudice against public officials talking about God, I promise you that atheists are unaware of it since it happens all the time. Sen. Ted Cruz announced his candidacy for President at Liberty University, and you can’t go through a debate without hearing shout-outs to the Christian God. You want prejudice? Try finding a politician who says God doesn’t exist. I’ll wait.

And there’s no law against saying “Merry Christmas.” If you’re a business owner and you want to alienate some of your non-Christian customers, go for it.

Hatch’s entire speech was full of bullshit like this. Even if you agree with his David Barton-esque revisionist history that says the Founding Fathers didn’t want church/state separation, it’s still a good idea. Whatever we once were, we are no longer a nation of just Christians. We are becoming increasingly secularized and we’re better off having laws that are supported by evidence rather than ones that rely on faith. Church leaders, especially, should be thrilled that the government doesn’t interfere with their work.

Keep in mind that, as bad as Hatch thinks things are, the White House still has an Office of Faith-Based and Neighborhood Partnerships, churches are still tax-exempt despite all the money they take in for non-charitable purposes, and the IRS doesn’t even go after them when they break the rules.

That’s not what a “secularized” nation looks like. This is very much a country where you’re rewarded for believing in the Christian God. Laws that call for neutrality from the government on religious matters is really not asking much.

***Update***: Interesting fact pointed out to me by Rob Boston of Americans United: Nowhere in the speech does Hatch mention the views of James Madison, the “Father of the Constitution,” who was a strong champion of the separation of church and state.

November 5, 2015
Conservative Christians Are Mad at American Girl Magazine for Showing a Picture of Gay Parents
Next Post

November 5, 2015 Questionable "Hit List" by Bangladeshi Terrorists Targets Atheists Living Abroad
Browse Our Archives
What Are Your Thoughts?leave a comment