Yesterday, Dr. Ben Carson proved once again that you can be brilliant in one field and batshit crazy in all the other ones.

Speaking in 1998 at a graduation ceremony for Andrews University (a school affiliated with the Seventh Day Adventist church), Carson told the students his personal theory of why the pyramids were built (around the 3:45 mark): 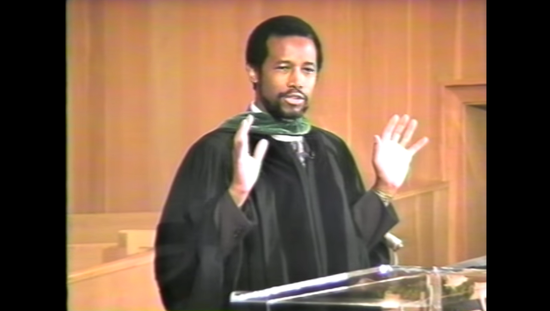 “My own personal theory is that Joseph built the pyramids to store grain,” Carson said. “Now all the archeologists think that they were made for the pharaohs’ graves. But, you know, it would have to be something awfully big if you stop and think about it. And I don’t think it’d just disappear over the course of time to store that much grain.”

“And when you look at the way that the pyramids are made, with many chambers that are hermetically sealed, they’d have to be that way for various reasons,” Carson said. “And various… scientists have said, ‘well, you know there were alien beings that came down and they have special knowledge and that’s how–’ you know, it doesn’t require an alien being when God is with you.”

I assure you that “aliens” is not a prevailing theory in archaeology. Or any other scientific field for that matter.

When asked if he still believed that nonsense, Carson told CBS News yesterday that he does.

Because of course he does. He’s Ben Carson. If the Bible said people who pray really hard can fly, he’d believe that, too. What’s scary is that this is nowhere near the top of the list of silly things he’s said… and that millions of Republicans still think he’s capable of being President.

When Donald Trump is considered the smarter Republican frontrunner, you know the nation’s in trouble.

November 5, 2015 Half of the New Canadian Cabinet Members Chose to Skip "So Help Me God" in Their Oaths of Office
Browse Our Archives
What Are Your Thoughts?leave a comment