Pat Robertson Just Got Trolled by a Gamer

I don’t know much about video games, but here’s what I can tell you about Undertale: It’s a role-playing game where you don’t even have to kill anyone if you don’t want to.

And here’s a stylized version of one of the characters, Sans:

Again, he’s just a harmless video game character. He’s also the subject of a question Pat Robertson decided to answer on The 700 Club yesterday. Viewer “Payton” said he saw the character on his daughter’s phone and wanted to know how to help his daughter “not be attracted to such demonic things.” 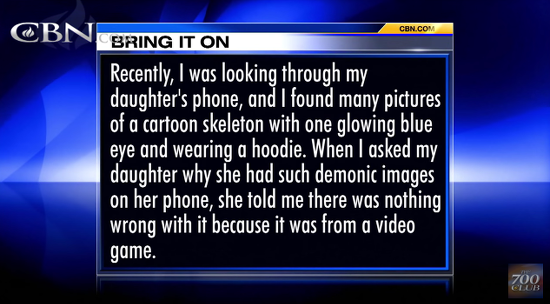 To his credit, Robertson gave a decent answer about how it wasn’t a big deal and the father should just give her a better game to enjoy. He said this particular game clearly symbolized violence — which it doesn’t — but there you go.

Fans of the game are having a field day with Robertson’s response, and one user even provided proof that he’s the one who submitted the question:

Moral of the story: It’s just that easy to have Pat Robertson answer your question. Make it happen, people.

(Top image via Know Your Meme. Thanks to Crow for the link)