According to the Military Religious Freedom Foundation, this is a real shirt that was being sold at the Fort Carson installation in Colorado: 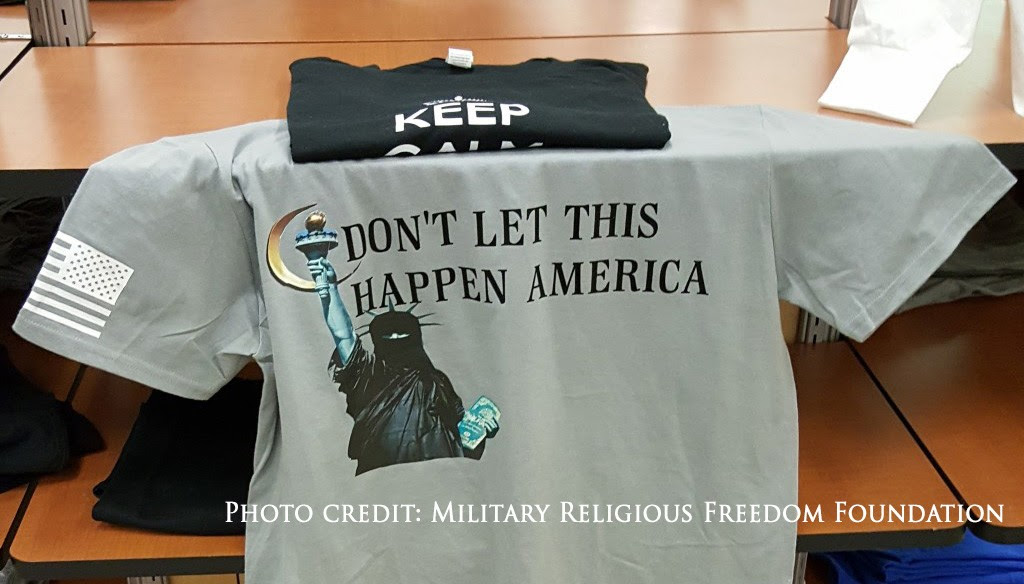 I’m offended, too. It’s missing a comma before the word “America.”

MRFF President Mikey Weinstein said this in a statement:

The juxtaposition of that shocking image and text message on that T-Shirt epitomizes the wretched plight of prejudice and bigotry which innocent Muslim-Americans all too often suffer while so honorably serving in today’s service branches.

The fact that this matter happened at Fort Carson, a major military installation which has had so many of its soldiers killed and grievously wounded in the War on Terror, only miserably magnifies the malfeasance of permitting that “Shirt of Shame” to be sold at its Post Exchange.

I just want to make a simple point here: MRFF isn’t an atheist group (even though that’s the perception people have of them). Yet they were the first ones to call out this awful shirt because they know bigotry is wrong no matter who’s on the receiving end of it.

Where were the Christian groups when this shirt was on the shelves?

Even now that the shirt has been removed, why aren’t Christian groups in line to thank MRFF? I have yet to hear of any.

November 4, 2015 Opal Covey, Prophetess Who Warned of God's Wrath, Comes in Last Place in Toledo Mayoral Race
Browse Our Archives
What Are Your Thoughts?leave a comment