In Video, Young Afghan Woman Who Eloped with Her Lover is Stoned to Death by Taliban November 3, 2015 Hemant Mehta

In Video, Young Afghan Woman Who Eloped with Her Lover is Stoned to Death by Taliban

In a part of Afghanistan controlled by the Taliban, a roughly-20-year-old woman by the name of Rokhsahana was stoned to death for the crime of eloping with a man in order to escape the future husband her parents had picked out for her. 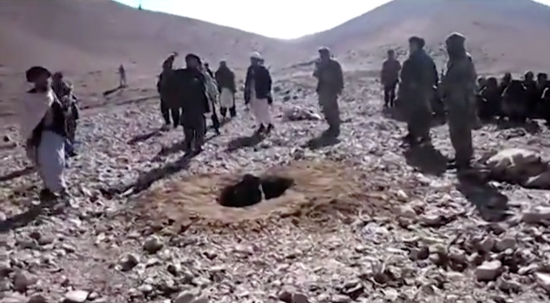 Graphic video of the stoning shows the woman, named as Rokhsahana and aged between 19 and 21, in a hole in the ground as men almost casually hurl stones at her with sickening thuds.

Rokhsahana can be heard repeating the shahada, or Muslim profession of faith, her voice growing increasingly high-pitched in the nearly 30-second clip run in Afghan media. Local authorities confirmed the footage.

November 2, 2015
Was a Newspaper Wrong to Publish a Letter to the Editor Linking Autism and Vaccines?
Next Post

November 3, 2015New York Times Reveals How Religious Arbitration Cases Work Against the Powerless
Browse Our Archives
What Are Your Thoughts?leave a comment