In an excellent interview with Fareed Zakaria on Friday night, Richard Dawkins lamented all the Republican candidates who reject evolution, rightfully calling it a “disgrace.” He threw them a bit of a bone by saying he didn’t think they were all that ignorant; they were probably just pandering to their base.

The most specific criticism, though, was reserved for Dr. Ben Carson. As a skilled doctor, Dawkins argued, he should be first in line defending science, not disregarding the evidence in favor of primitive, biblical thinking. 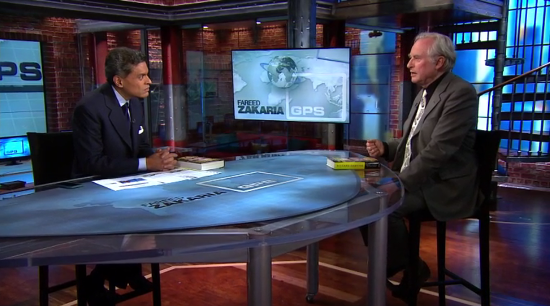 Ham argued that Dawkins has no business telling a “real” scientist how to think:

[Dawkins] went on to say this about Dr. Carson: “He clearly doesn’t understand the fundamental theorem of his own subject. That is a terrible indictment.”

Actually, by making such an ignorant and nonsensical statement, Dawkins is disproving his own accusation! Obviously, Dr. Carson didn’t need to believe in evolution to become a world-renowned pediatric neurosurgeon with sophisticated skills at age 33, receive 67 honorary doctorate degrees, separate conjoined twins, become a member of the Alpha Honor Medical Society, be named to the Horatio Alger Society of Distinguished Americans, be picked by Time magazine as one of the nation’s 20 foremost physicians and scientists, for the Library of Congress to select him as one of 89 “Living Legends,” receive the Spingarn Medal (the highest honor bestowed by the NAACP), be awarded in 2008 the Ford’s Theater Lincoln Medal and the Presidential Medal of Freedom by President Bush (the United States’ highest civilian honors), and for actor Cuba Gooding Jr. to portray Carson in the TNN television production Gifted Hands in 2009 — along with many other accomplishments.

How does that impressive list line up with what Richard Dawkins has accomplished in this world?

Dr. Carson is a real scientist. What are Dawkins’ accomplishments for the advancement of medicine or biology? While Dawkins is one of the world’s most ardent evolutionary zealots and claims that evolution is the “bedrock” of medicine and biology, is he known for technological advances that have been world shattering? His claim to fame is that he continues to travel the world to disparage Christians, mock God, and bully people into believing his fairy tale about the origin of life! If evolution were such a “bedrock” as he claims, he should be helping lead the way in making great technological achievements!

This is how we know Ken Ham doesn’t even know how to do a Google search.

Look: It’s true that Carson is a really good doctor. One of the best in his field. It’s also true that his background and, yes, his skin color make for a very compelling story. But listing off his awards isn’t the same thing as listing accomplishments in the field. As with many honorary awards, once you get the first one, many others follow. No one’s denying that he’s a scientist, either — he’s an author on several peer-reviewed papers. But none of those papers, as far as I know, have anything to do with evolutionary biology.

You can do science without accepting evolution. That doesn’t negate your accomplishments. But Carson is like a Civil War historian who thinks the Earth is flat. You don’t have to accept it, but it should still make the rest of us question your judgment.

But I really take issue with Ham arguing Dawkins has no scientific accomplishments of his own. Here’s a long list of Dawkins’ published papers, most of the earlier ones being purely academic. Before the God Delusion came out in 2006, Dawkins was known primarily for communicating science and writing books making evolution accessible to the masses. The man knows his science even if you’re not a fan of his God-talk (or Twitter feed, for that matter). Furthermore, you don’t need a Ph.D. in science to understand how the subject works.

Ham would’ve known that if he did any research. Like his fellow Creationists, however, he hasn’t figured out what that is. He’s just bitter because Carson’s refusal to accept reality is going to become a liability in a general election and people like Dawkins are going to continue hammering that point at every opportunity.

November 3, 2015
As Usual, Survey Shows Religion in Decline, Especially Among Millennials
Next Post