Yesterday, while speaking at Cornerstone Church in Tennessee, Dr. Ben Carson admitted (once again) to being a Creationist and how that never stopped him from being successful, as if ignorance were some badge of honor (41:00 mark): 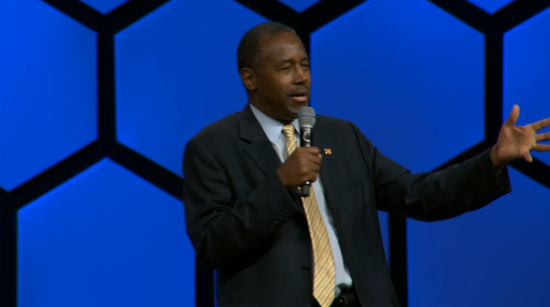 [Progressives] say, “Carson, ya’ know, how can you be a surgeon, a neurosurgeon, and believe that God created the Earth, and not believe in evolution, which is the basis of all knowledge and all science?” Well, you know, it’s kind of funny, but I do believe God created us, and I did just fine. So I don’t know where they get that stuff from, ya’ know? It’s not true. And in fact, the more you know about God, and the deeper your relationship with God, I think the more intricate becomes your knowledge of the way that things work, including the human body.

Just to clarify Carson’s mischaracterization of his opposition, no one’s surprised that he’s a neurosurgeon despite his unwillingness to accept reality. You don’t need to accept evolution to understand how to perform surgery and know how to handle complications in the operating room. It’s like rejecting the laws of physics when you’re a baseball player: You don’t need to accept gravity to know how to hit a ball.

It’s just really fucking weird when you don’t. You would think people who dedicate their lives to a scientific endeavor would accept evidence that contradicts the Bible. Then again, there are intelligent people who think the solution to school shootings is to have more guns. Smart believe can believe really stupid things.

But people who believe really stupid things shouldn’t be leading our country.

I don’t trust Carson’s judgment because I know he’ll ignore rock-solid evidence if a voice in his head tells him otherwise. We don’t need a President who only signs bills that arrive at his desk inside of a Bible.

(Thanks to @DerekLisle for the link)

November 2, 2015
If God Helps Both Teams in a Football Game, Who Does He Love More?
Next Post