Luciferian Church Opens Up in Texas with Christians Protesting Outside November 1, 2015 Hemant Mehta

Luciferian Church Opens Up in Texas with Christians Protesting Outside

A new non-Christian church opened up in Texas over the weekend, and Christians were there to protest. Because people who think differently and gather peacefully Must. Be. Stopped.

The Greater Church of Lucifer, however, took it all in stride: 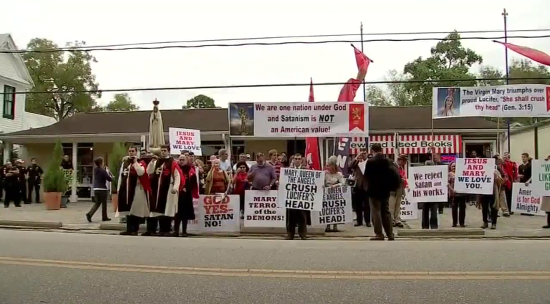 These Luciferians say they just want to go about their business.

“They have the right to do what they do. And that’s cool with us. But we have a right to believe in what we do too. And we need to co-exist,” [Co-President Michael W.] Ford says.

Brilliant. You don’t often hear a calm response like that, but it shows you how mature the people were inside the new church compared to those protesting outside of it.

Leading the protest was Christine Weick, who may be better known as the woman who thinks Monster energy drinks are the work of Satan and who interrupted a Muslim prayer at the Oklahoma State Capitol building.

“We are all Christians here, together against this,” she said. “We ought to be filling up the whole street here that they have to pass through us to get into that church.”

But Christine Weick says God’s love is exactly what she’s showing while she’s here: “I love you enough to say you either bow now or you will be forced to bow later and it’s too late.”

Again, she has every right to protest, but consider this: If the Luciferians did the exact same thing in front of any Christian church, there would be nonstop coverage of it in the right-wing world: How dare those people get in the way of our worshiping?!

Kudos to the Luciferians — who, by the way, don’t worship the devil or sacrifice animals and shouldn’t be confused with Satanists — for ignoring the ramblings of the whiny protesters and just going about their business as if they weren’t there.

November 1, 2015
The Differences Between Atheist and Christian Parents
Next Post