A Superintendent is Mad Because Students Know They Don’t Have to Stand for the Pledge November 1, 2015 Hemant Mehta

Saying the Pledge of Allegiance in school is optional.

All of this should be obvious, but many students are unaware of their rights in these situations.

Now, the superintendent of Florida’s Santa Rosa County District Schools is upset because students in his district are being told about their options. If he had his way (freedom), they would all be pressured (freedom) into saying it no matter what (‘Murica!).

His complaint has to do with signs in classrooms that read: “Students are invited to stand and recite the Pledge of Allegiance to the flag of our country, but they are not required to do so.” 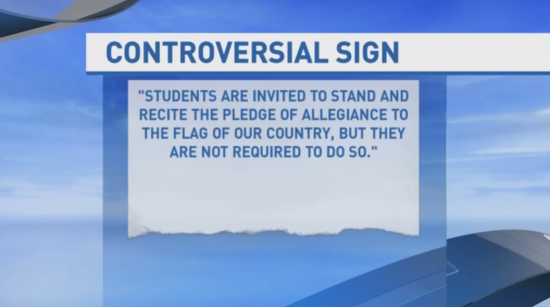 Superintendent Tim Wyrosdick, says if it were up to him, they would not be in classrooms. “I was raised to honor this country and respect it,” Wyrosdick said. “Standing for the pledge is not only a requirement it’s a privilege that we stand and pledge allegiance to the United States of America. That’s my personal belief and my moral belief.“

Well, his personal beliefs are wrong.

You don’t have to stand for the Pledge to be a patriot. In fact, the students who choose to remain seated are doing so because they know it’s wrong to force people to say we’re a nation “Under God.” They know we don’t really have “justice for all.”

Acknowledging our nation’s faults and working to fix them, to me, is a much better sign of patriotism than students who mindlessly go through a ritual because it’s just what everyone else is doing.

And you know what? You don’t have to be a patriot either. It doesn’t matter if you hate the country or its actions. You still don’t have to stand for the Pledge.

The signs were put up in the first place because a student and parent complained that kids were being told they had to stand and say it. This was a way to solve that problem. But Wyrosdick still thinks it’s unnecessary:

Wyrsodick immediately received negative feedback from many parents, and he doesn’t argue with them. “I loathe having to tell a student they don’t have to stand for the pledge,” he said. “I feel like it’s a responsibility that we should hold fast. The issue is not Santa Rosa County schools it’s the law.“

Bullshit again. Wyrsodick refers to a Florida statute that says:

Each district school board may adopt rules to require, in all of the schools of the district, programs of a patriotic nature to encourage greater respect for the government of the United States and its national anthem and flag, subject always to other existing pertinent laws of the United States or of the state.

The Supreme Court ruled several decades ago that no one has to stand for the Pledge.

It’s a bad sign when a school district is run by someone who cares more about pressuring students to recite the Pledge than protecting their freedom not to participate. Instead of doing what a better superintendent would do and saying that all students have a right to remain seated during the Pledge if they want to, he’s calling out the students who make that decision, as if they’re bad kids who have no respect for our country or veterans.

His comments are precisely why these signs need to be up in the classrooms.

(Screenshot via WEAR-TV. Thanks to Brian for the link)

November 1, 2015
Luciferian Church Opens Up in Texas with Christians Protesting Outside
Next Post