“Jesus” Judo Kicks Man Who Spit on Him at Abortion Protest October 31, 2015 Tracey

“Jesus” Judo Kicks Man Who Spit on Him at Abortion Protest

A man dressed as Jesus showed up to an abortion protest outside of the Red River Women’s Clinic in Fargo, North Dakota last week with the intent of humorously annoying the opposition. Nik Severson, A.K.A. Jesus, sang “99 bottles of beer” and various chants while holding a sign with an arrow pointing at protesters that read, “Should have been aborted.” 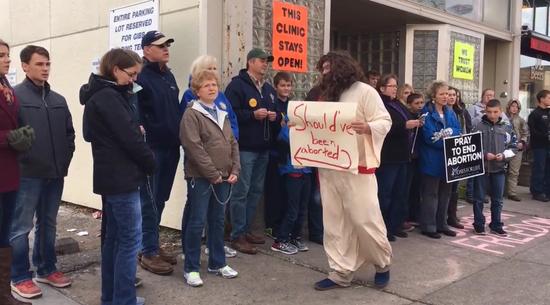 The joke was not shared by a passerby, Tyson Kuznia, who felt Severson was being “both slanderous and intentionally rude towards the protesters,” and decided to cast the first stone by spitting in Severson’s face. Because, apparently, Severson is a judoka in a Jesus disguise, his response was to administer a sweeping leg kick, injuring Kuznia’s knees and breaking his glasses on the way down.

Two officers from the Fargo Police Department showed up to the scene, but neither man was arrested. Both men were later charged with disorderly conduct. 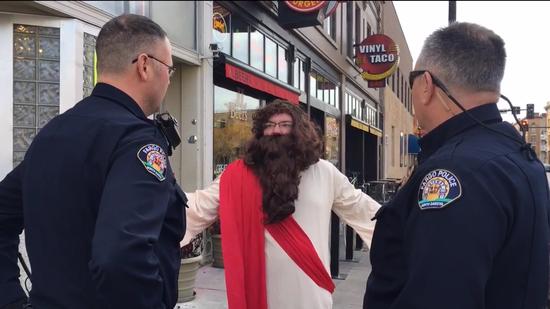 As part of the 40 Days For Life demonstration, protesters have been standing outside the Fargo women’s clinic around the clock, coming in by the bus load to switch shifts. The event ends November 1.

When asked why he was counter-protesting, Severson told The Forum he was giving them, “a taste of their own medicine.”

“There’s not really a motive, I just don’t like people using God to shame women.”

Asked his views on abortion, Severson said he’s “not a woman, so I don’t have a stance on that.”

While protesters were chanted “Hail Mary” prayers, Pretend Jesus paced back and forth with his “Should have been aborted sign,” rallying the group.

The “woe is me” game was heavy from the protesters, claiming Severson made a little boy cry and then laughed at him. If a little boy did cry, it’s likely because Sevenson was the kid’s first taste of rabble-rousing, challenging the sanctity of his parents’ beliefs.

Protesters claimed they were there as a peaceful demonstration of prayer — because God can only hear their abortion prayers when you recite them out loud, directly beside the door of the clinic. Or we can call it like it is, and say they’re there to judge, shame, and intimidate women.

***Update***: According to InForum, Nik Severson has been receiving death threats and has lost his job due to his antics.

“I don’t think I’ll be able to find a job now. I may have to move out of town. How am I going to get a job in this town?” Severson said Monday afternoon. “I just started and it seemed like everything was going good. It didn’t seem like anybody had a problem with what I was doing, at least some of the guys. I don’t know what I’m going to do now. I’m going to be hurting for awhile.”

October 31, 2015
Christian Students in Kentucky Put Post-It Notes with Bible Verses on Every Locker in School
Next Post