In Kentucky this week, a group of Christian students at two high schools thought it would be just awesome if they wrote Bible verses on Post-It notes and slapped them on the lockers of every student. (Because Jews and Muslims and Hindus and atheists need to convert and putting litter on their lockers is the best way to make it happen, I guess.)

But the notes that were put up on Wednesday afternoon were gone by Thursday morning at one of the high schools. 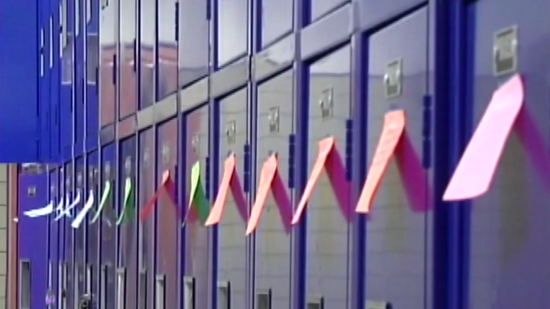 The sticky notes were placed on every locker at Paintsville and Johnson Central High School on Wednesday afternoon by students from both schools. “We want people to realize, Jesus loves everybody, not only us,” said Paintsville senior Laura Keeton, who helped write and hang the notes.

But the next day, only the lockers at Paintsville Independent still displayed the hand written verses…

Administrators at Johnson Central made the decision to remove the Post-it notes before students arrived Thursday morning.

What a weird way to show people Jesus loves them. Can you imagine the reaction if Muslim students tried to do the same thing using verses from the Qur’an?

It’s also completely ineffective. I promise you kids in Kentucky have heard about the Bible before. If a Post-It note is all it takes to change your faith, well, then the Christians can have you.

I would love to see students at Paintsville repeat the experiment using some less pleasant Bible verses. Post “I do not permit a woman to teach or to assume authority over a man; she must be quiet.” from 1 Timothy 2:12 and see how well that goes over. If you want to show kids how much Jesus loves them, have the courage to show all the parts of the Bible, not just the sugar-coated bits.

That said, I’m not defending the administrators at Johnson Central who took down the notes.

It seems like overreach for them to get in a way of a student-led activity, even though it’s a religious one. Students are allowed to proselytize to each other, even if it’s annoying, and atheists should be protecting that right. This wasn’t a hateful message. It was just a silly one. The only excuse I can offer in the administration’s defense is that they didn’t want to give students the impression that this was endorsed by the school and the notes may not have been clearly marked with the student group’s name. (If they were, I take that back.)

So far, neither principal has issued a public statement about what transpired.

(Screenshot via WKYT. Thanks to Jaime for the link)

October 31, 2015
Shaming Feminine Trans Women Is Not Feminism
Next Post