In case you had any question about the connection between Christians and the Republican Party, a Virginia GOP leader ran an ad in the local newspaper for next week’s statewide elections that said “Preserve our Christian Heritage! VOTE REPUBLICAN.” 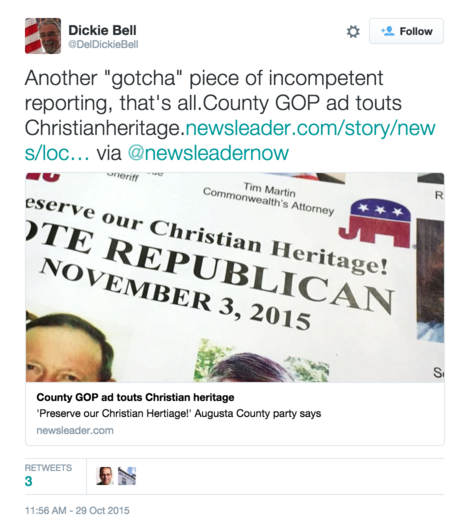 “God is a foundation of our nation,” said [Larry] Roller, of Mount Sidney, who is on the GOP committee. “If you read the histories of our founding fathers, (they say) you should not run for office if you are not a Christian.”

Right… the same Founding Fathers who put a clause in the Constitution prohibiting a religious test for public office didn’t want non-Christians to run for office? Doubtful. Hell, many of them weren’t exactly Christians anyway.

Must be some weird conservative logic at work…

Before you say this was just one lone theocrat, look at the reaction from another Repubican running for office:

Tim Martin, GOP candidate for Commonwealth’s Attorney, said he didn’t see the ad before it ran, but kind of laughed when called Thursday. “That’s funny. I’m Christian, so I don’t have a problem with it. … As a prosecutor I will be guided by my Christian values. Paramount in my book, is justice, mercy, fairness and the positive values enumerated in the Bible.”

That’s the whole problem in a nutshell, isn’t it?

Of course he doesn’t have a problem with it. Christians, for all their empathy talk, are unable to put themselves in the shoes of people who aren’t Christians.