Remember Opal Covey, the woman running for mayor in Toledo, Ohio who speaks in tongues and is a self-described “prophetess”?

Because she’s still in the race, a local news team interviewed her as part of the station’s mayoral race coverage. It’s fairly obvious both anchors think she’s batshit crazy. The interview involves questions about Covey calling a local business “Satanic,” whether her “prophet talk” will scare businesses from moving to Toledo, her claims that she had previous elections stolen from her, and her conviction on animal cruelty charges. 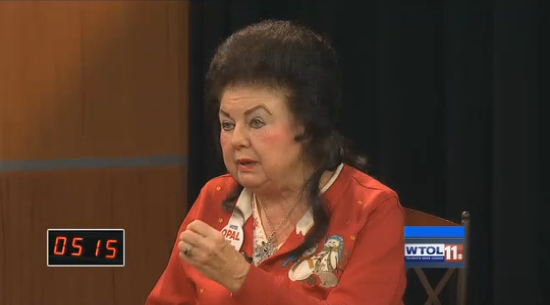 Best question of the interview: “If God wants you to be mayor, [how is it that] he keeps letting other people steal it from you?”

Of course it is…

I’m tempted to complain about the anchors treating her as a legitimate candidate at all, but truth be told, I couldn’t tell you why this interview is any nuttier than Chuck Todd‘s recent interview with Dr. Ben Carson. Carson’s just as delusional; he just happens to be running on the national stage.

(Thanks to Tara for the link)