As promised, Jesus has returned.

Okay, not really. But his name is Jesus and he is white, just as depicted above your grandma’s mantle. 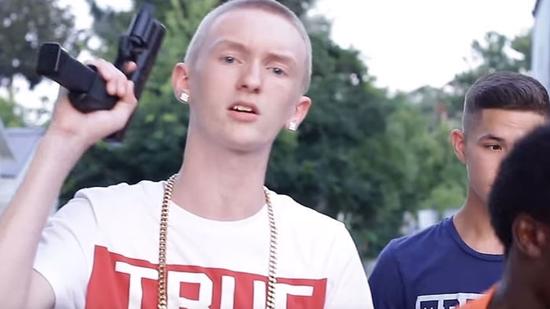 Slim Jesus is a tough-talking, 18-year-old rapper from Ohio who just busted on to the scene last month with a viral video for his first single, “Drill Time.” To date, the only known miracle Slim has performed is not getting himself killed by real gangsters while wielding handguns and threatening to “put a hole in your fuckin’ back.” Mr. Jesus admitted in an interview that he has no criminal record and doesn’t really kill people — he just thinks it’s “dope” to pretend. He chose the name Slim Jesus because it makes people mad, which is about the only thing this guy has said that I support.

I got my name from, one of my homies started calling me Swag Jesus, and that sound a little goofy, so I flipped it up. But it sounded cool and it made people mad, so I stuck with it with Slim Jesus.

Good thing he changed his name. Everyone would mock a rapper named Swag Jesus.

Like the Messiah, Slim Jesus offers his own unique path to salvation in this revision of the Ten Commandments:

1. Keep a good circle behind you, man. At the end of the day they’re going to be the ones who keep you up, man. Fuck a square.

2. Don’t get stained. If you’re going to buy something and you don’t know what you’re talking ’bout, bring a homie with you that does, ’cause gonna get stained and you’re a goof… (incoherent Jesus speak)

3. Don’t trust snakes, man. If he traded up on someone else to be with you, he’s going to trade up on you at the end of the day for a dollar, man, you can’t go.

5. Don’t depend on nobody else’s grind to put food on your plate. You’re going to go hungry at the end of the day, man. Everybody get lazy.

7. Don’t fuck with broke thots. If you want to buy her dinner, that’s on you. But we don’t love these hoes, we ain’t payin’ for nothin’. Uh-uh.

9. Don’t get catfished. This is 2015, fat hoes look hot on Twitter, I need multiple camera angles. I can’t go. Pull up to the hotel room lookin’ like a bag of potatoes, uh-uh.

10. Don’t trust anybody 100%. At the end of the day, whether it’s 5 days down the road, or it’s 5 years, everybody got a motive and you will find out. Everybody got a reason.

Still makes more sense than whatever that Toledo mayoral candidate/”Prophetess” was saying.

If his Twitter account is any indication, Slim is already planning a Second Coming with a new track.